Shadow Board Fully Confident: Cash Rate Must Stay On Hold

The outlook for the coming month is largely unchanged from the September meeting. The lockdowns in the two most populous states, NSW and VIC, are clearly stalling the economic recovery, but high vaccination rates, a phasing-out of stay-at-home orders, and the prospect of domestic, and even international, travel restrictions easing, should reignite the domestic economy heading into the Christmas period. There is no new data on inflation which, measured by the growth rate of the CPI, surged by 3.8% (year-on-year) in the June quarter, above the RBA’s official target band of 2-3%. The RBA Shadow Board’s verdict is unchanged from the previous month: it is certain (100% confident) that keeping the cash rate at the historically low rate of 0.1% is the appropriate policy for the October round.

The most recent official ABS unemployment rate posted another surprise decline, from 4.6% in July to 4.5% in August. As has been widely discussed in the media, this figure alone is not a good gauge for the overall health of the labour market as total employment contracted by more than 145,000, the largest drop bar the decline in April and May of last year. Accordingly, the participation rate dropped nearly a full percentage point, to 65.2%, and the underemployment rate increased one percentage point, to 9.3%. Monthly hours worked decreased by 66 million hours, that is, by 3.6%. Job advertisements declined for the second month in a row.

The Aussie dollar fell from a recent high of 74.5 US¢, ending the month of September barely above the 72 US¢ mark. Yields on Australian 10-year government bonds, on the other hand, rose to 1.5%. The shapes of the yield curves remain the same: the yield curve in short-term maturities (2-year versus 1-year) remains flat, as intended; in mid-term versus short-term maturities (5-year versus 2-year) and in higher-term maturities (10-year versus 2-year) the yield curves continue to display normal convexity. However, the spreads widened noticeably – from 119 basis points to 146 basis points for the spread between the 10-year rate and the 2-year rate. The Australian stock market extended its decline; the S&P/ASX 200 stock index closed below 7,200, some 400 points below the all-time high in mid-August.

There are mixed signals about the health of the global economy. According to the OECD, as detailed in its September Interim Report, “economic growth has picked up this year, helped by strong policy support, the deployment of effective vaccines and the resumption of many economic activities.” Global GDP, supported by a strong rebound in Europe and a likely large US fiscal stimulus, is projected to grow by 5.7% in 2021 and 4.5% in 2022. However, there are some near-term risks and the uncertainty around these projections remains large. Inflation has increased in many countries around the world, with higher commodity prices and global shipping costs adding around 1.5 percentage points to annual G20 consumer price inflation. The OECD expects short-term supply constraints to “fade gradually” and still considers inflation expectations to be well anchored. The debt crisis surrounding Evergrande, China’s second largest property developer, may cause some serious dislocations and generate ripple effects throughout the Chinese economy, and possibly beyond. While it is unlikely to cause a systemic financial crisis, or credit crunch, it does highlight the fragilities in the Chinese economy and its financial system.

Australian consumer confidence, after a recent decline, stabilised: the Melbourne Institute and Westpac Bank Consumer Sentiment Index inched up from 104 in August to 106 in September. Retail sales contracted for the third month in a row, by 1.7% month-on-month. NAB’s index of business confidence rose from -7 in July to -5 in August, still well below average. The services PMI experienced another significant contraction, 51.7 in July to 45.6 in August; the manufacturing PMI less so, from 51.6 in August to 51.2 in September. Capacity utilisation, recorded at 80.02% in August, is more than five percentage points lower than in May. The Westpac-Melbourne Institute Leading Economic Index declined for the fourth month in a row, by 0.3% month-over-month in August, the steepest decline in the series. The six-month annualised growth rate in the Leading Index equals a mere 0.5%, down from 1.3% recorded in July. These numbers should improve noticeably towards the end of this year, as the lockdowns in NSW and Victoria are progressively lifted and border restrictions ease.

House prices continue to extend their bull run, raising justified concern that they are divorced from fundamentals and that the possibility of a painful, sharp correction in the next couple of years cannot be dismissed. According to CoreLogic, the 5 capital city aggregate of their Home Value Index increased a staggering 19.26% year-on-year by the end of September. Building permits and new home sales are up in August; the Australia AiG Construction PMI declined for the fifth consecutive month, as a consequence of the extended lockdowns in NSW and VIC. The RBA recently pointed out that the housing market needs to be scrutinised going forward but more or less admitted that it was not in its remit to correct an overheated market – that responsibility falls on APRA.

The official cash rate target has been at the historic level of 0.1% for eleven months. The Shadow Board maintained its unprecedented unanimous conviction to keep the overnight interest rate at 0.1%: it is 100% certain that the overnight interest rate should remain steady, attaching 0% probability that either an increase is appropriate or a further rate cut to below 0.1%.

The probabilities at longer horizons are as follows: 6 months out, the confidence that the cash rate should remain at 0.1% has weakened further, from 87% in August and 83% in September, to 80% for this round; the probability attached to the appropriateness for an interest rate decrease remains exactly 0%, while the probability attached to a required increase rose from two percentage points to 20%. One year out, the Shadow Board members’ confidence that the cash rate should be held steady dropped from 67% to 62%. The confidence in a required cash rate decrease, to below 0.1%, is 0% (unchanged) and in a required cash rate increase 38% (33% in September). Three years out, the Shadow Board attaches a 7% probability (down one percentage point) that the overnight rate should equal 0.1%, a 0% probability that a rate lower than 0.1% is appropriate, and a 93% (92% in September) probability that a rate higher than 0.1% is optimal. The range of the probability distributions are unchanged; they extend from 0.1 to 2% over the 6 month and 12 month horizons and from 0.1% to 2.5% for the 3-year recommendation. 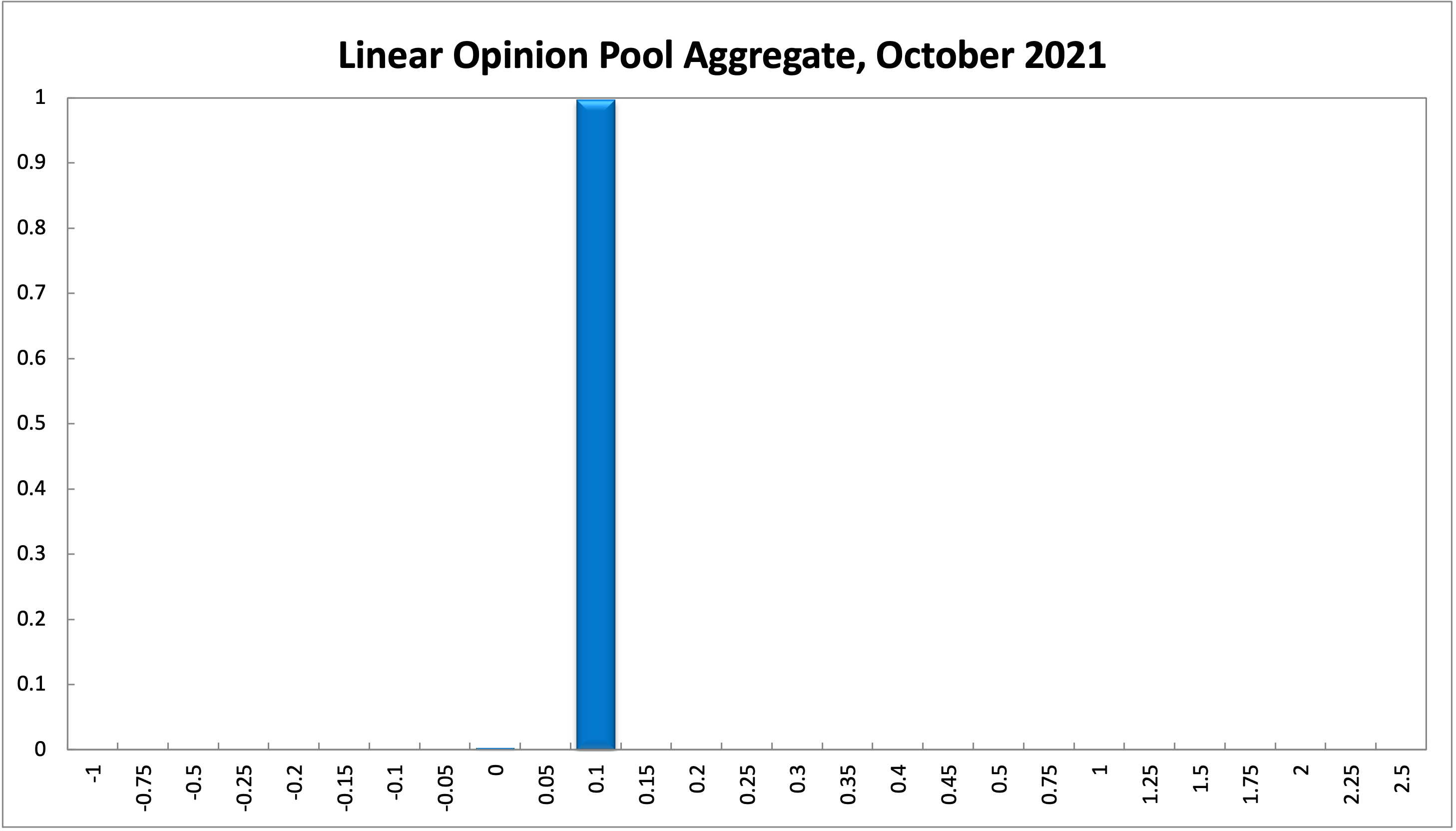 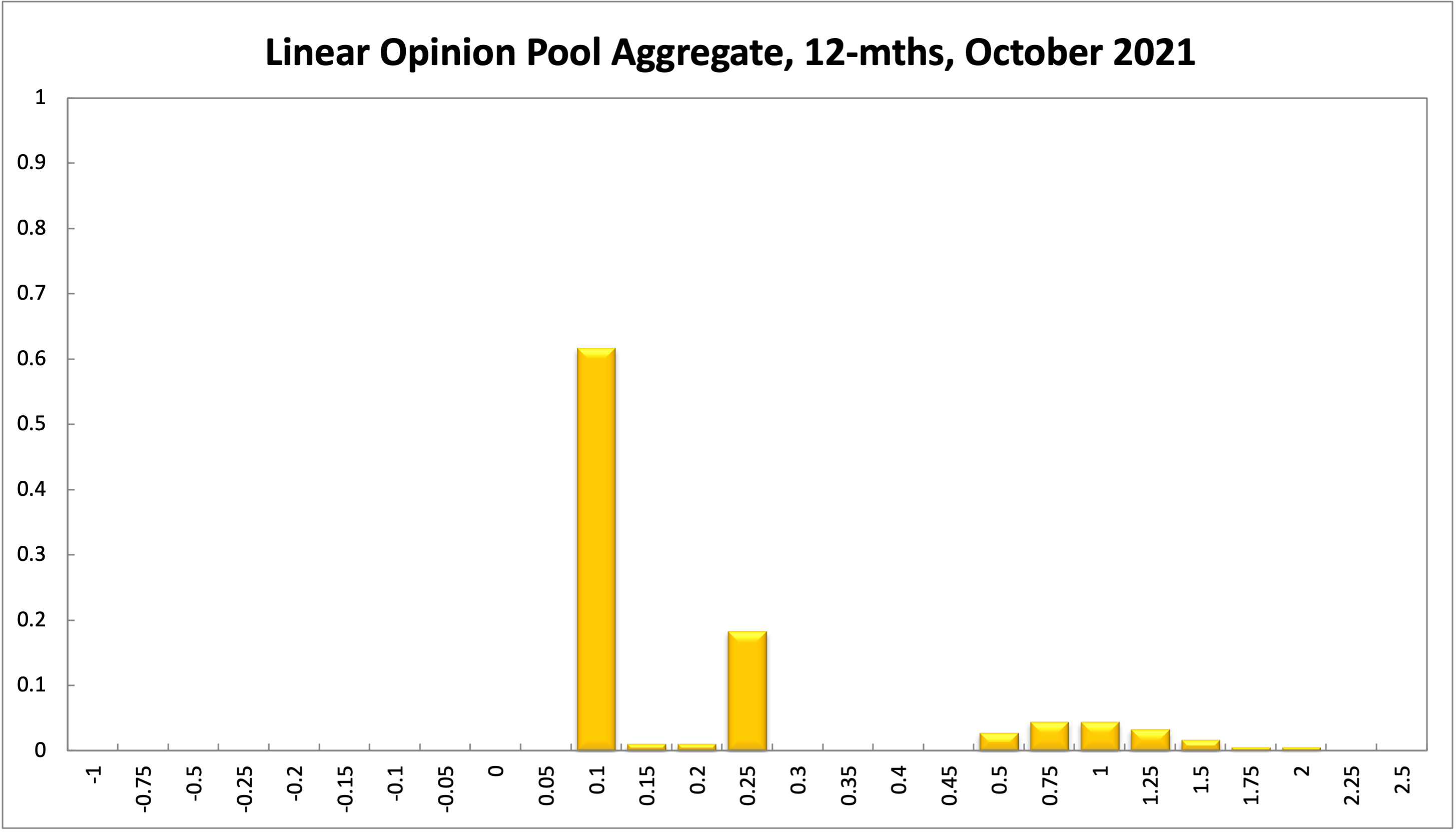 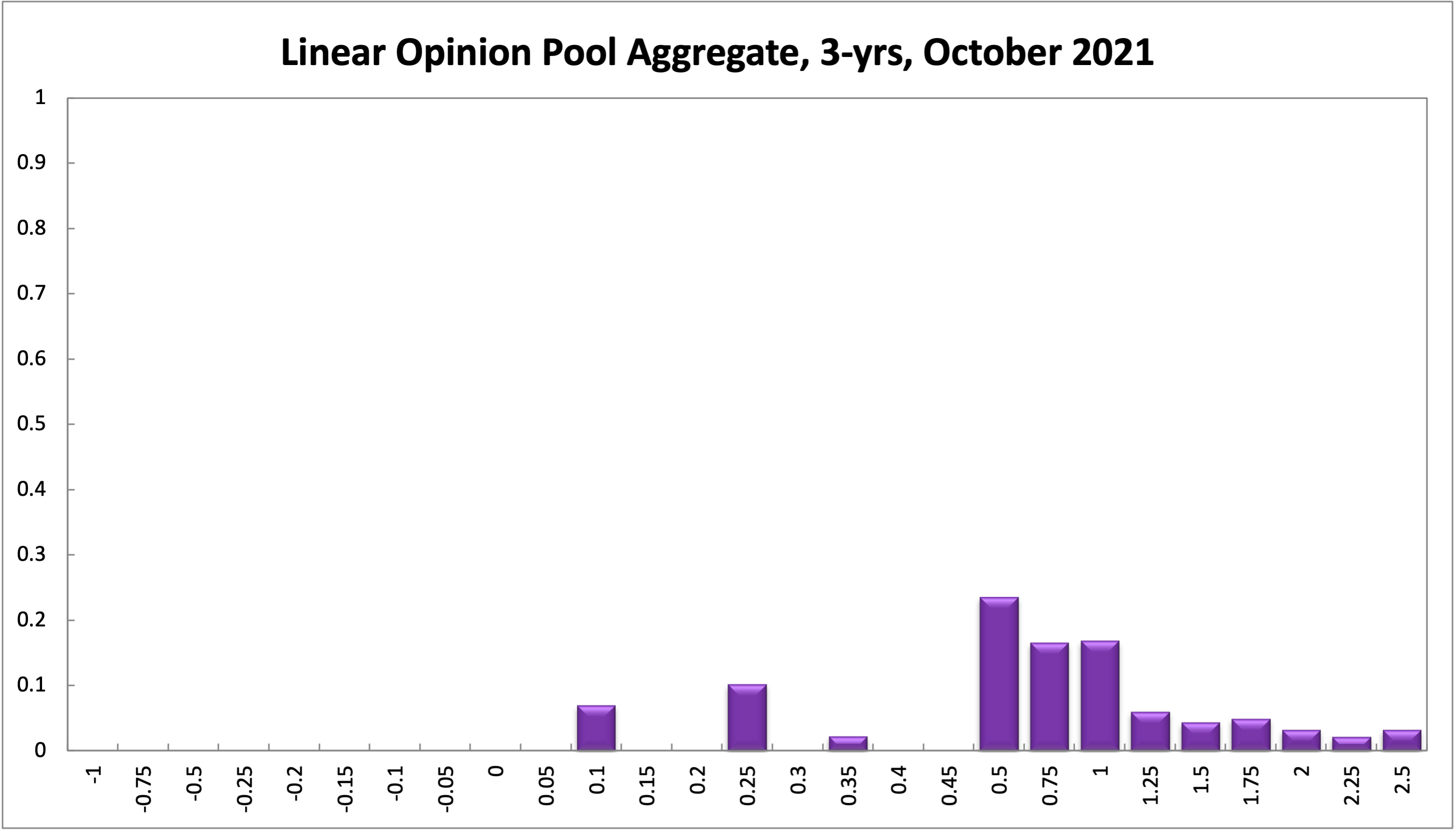