On the first Tuesday of every month (except in January) the Board of the Reserve Bank of Australia (RBA) meets to decide on a target for the cash rate. This decision is highly significant for the wider economy and is therefore closely monitored by the financial markets. The CAMA RBA Shadow Board, consisting of nine voting members and one non-voting chair, all distinguished macroeconomists, offers its own policy recommendation on the Monday before the official RBA decision. Members give probabilistic assessments of the appropriate target rate for each round, which are then aggregated. The higher the percentage attached to a given cash rate, the greater the confidence that this rate is the appropriate target.

For questions regarding the CAMA RBA Shadow Board, please contact Dr Timo Henckel. If you wish to access the database of past voting records for research purposes, please contact cama.admin@anu.edu.au. 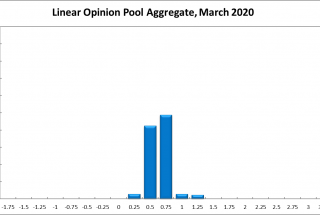 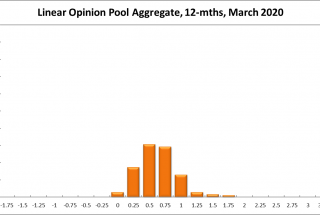 Fear about a global coronavirus pandemic are already taking their toll on world financial markets and are likely to impose significant economic costs on the Australian economy, should the crisis worsen. Tepid wage growth, a slight increase in the unemployment rate and an inflation rate that remains below the Reserve Bank of Australia’s official target range of 2-3% all point to economic weakness. The RBA Shadow Board’s conviction that the cash rate should remain at the historically low rate of 0.75% equals 49%, while the confidence in a required rate cut equals 46% and the confidence in a required rate hike 6%.

Based on ABS figures for January, the seasonally adjusted unemployment rate in Australia ticked up, from 5.1% in December to 5.3%. This is due to the labour force participation rate rising 0.1 percentage points, to 66.1%, as total employment increased by 13,500. According to the latest quarterly data, a key variable for gauging inflationary pressures as well as the outlook for consumption expenditure, real wage growth remains worryingly low, at 0.4% year-on-year.

The Aussie dollar, after repeatedly testing support levels, has posted new lows. It is currently trading just above 65 US¢. Yields on Australian 10-year government bonds have also extended their recent declines, to a historic low of 0.86%. As in the previous month, the slight inversion of the yield curve in short-term maturities (2-year versus 1-year) remains in place, the spread having actually narrowed to -6.6 basis points. In mid-term vs short-term maturities the yield curve remains effectively flat. Like other stock markets across the globe, the Australian share market took a recent hit, retracing from its recent historical all-time high. The S&P/ASX 200 stock index fell more than 700 points, to below 6,450.

The most visible concern about the outlook for the global economy, adding to the already weak outlook (as stated in recent reports by the International Monetary Fund, the OECD, and other organisations), relates to the Covid-19 crisis. The World Health Organisation says the coronavirus outbreak has reached a decisive point and it may yet declare a pandemic. The Australian government in turn announced it was preparing for a major outbreak and putting in place appropriate measures. The fear surrounding this crisis has clearly battered financial markets worldwide although the likely cost to the Australian economy from it remains highly uncertain.

The government has repeatedly stepped back from its earlier commitment to deliver a budget surplus this year. However, even with fiscal policy less restrictive than planned, it may not be sufficiently expansionary to prevent the Australian economy from slowing down.

Consumer confidence, as measured by the Melbourne Institute and Westpac Consumer Sentiment Index, came in slightly higher in February, compared to a month earlier, at 95.5. According to the most recent data available (December) retail sales contracted by 0.5% (month-on-month). Year-on-year retail sales increases by 2.8%, which is still weak. Business confidence (NAB) remains virtually unchanged in January while the manufacturing and services PMIs feel further, to 45.4 (48.3 in previous month) and 46.6 (48.7), respectively. The capacity utilisation rate increased slightly in January, from 80.9% to 81.3%. 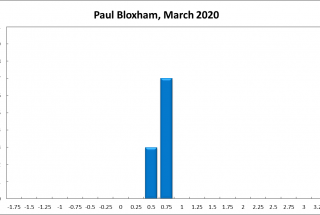 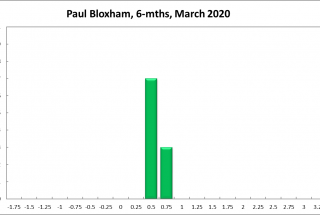 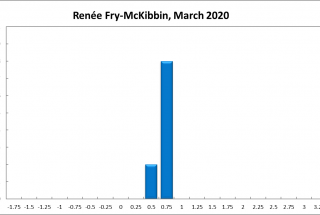 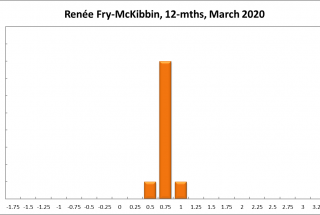 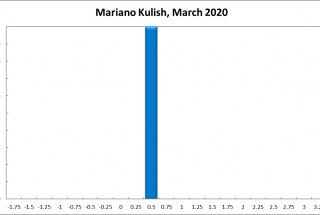 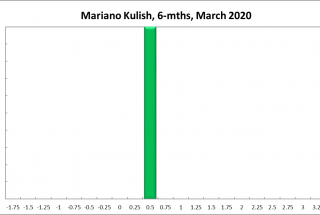 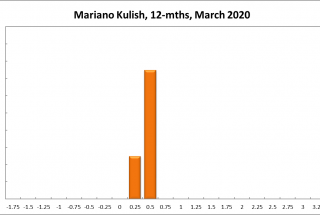 I would recommend that at this meeting the cash rate be reduced to 0.5%. Underlying measures of inflation have been persistently below 2 per cent increasing the risk that inflation expectations will anchor outside the inflation target over time. Indeed, over 2019 measures of long-run inflation expectations have been gradually falling and currently sit below target. The Bank should start responding more aggressively to inflation developments than it has in the recent past. In addition, the increasingly negative outlook surrounding the coronavirus virus means a rate cut is likely to be necessary now. 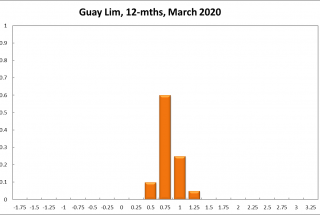 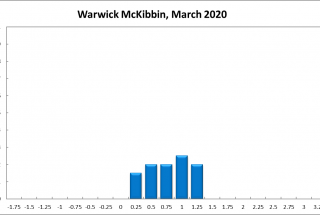 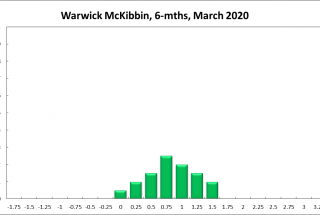 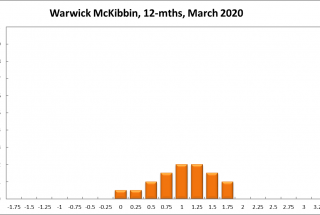 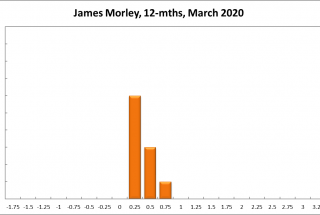 The RBA has recently signalled that the policy rate is expected to remain close to the effective lower bound for a considerable period of time. It would be helpful to provide more explicit guidance about exactly how long by explaining what conditions would lead to a more neutral position. An example would be to formally link the period of low rates to as long as it takes to bring measures of inflation expectations, such as the break-even 10-year inflation rate (which was at 1.5% annual rate at the end of 2019), back to the high end of the target range of 2-3%. This should lead to further depreciation of the exchange rate and even lower current and future real interest rates. By doing so, it should help offset the unanticipated effects of the recent undershooting of the target range for inflation in terms on future levels of prices and wages in the Australian economy. The urgency of a strong signal about keeping rates low has increased in recent weeks given the particularly likely negative impacts of a weaker global economy due to the Covid-19 crisis on Australian exports (e.g., iron ore, higher education, tourism). The maintenance of such low rates could be expected to last at least 6-8 quarters. 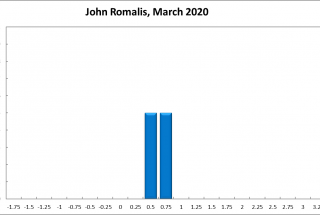 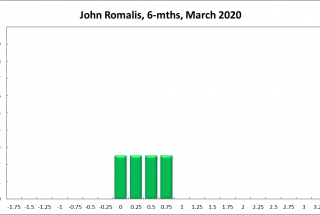 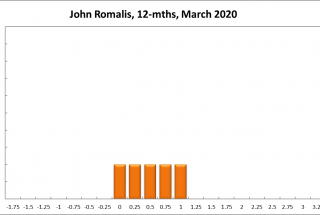 The combined weight of several negative demand shocks and negative supply shocks from domestic sources (drought, fires) and international sources (contagion) will likely take its toll on the Australian economy, making it much more likely that further easing of monetary policy is desirable. GDP growth will likely remain slow, and medium-term inflationary pressure will likely be modest despite the supply shocks. 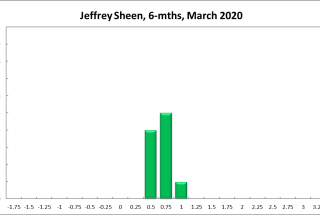 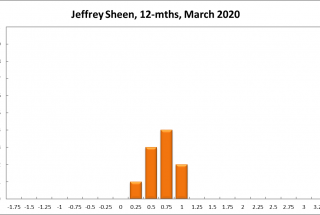 There will be noticeable negative macroeconomic effects from the over-reaction by governments to the latest flu variant. Temporary fiscal support is required and being applied. Until more macroeconomic information becomes available, the historically low cash rate should not be adjusted.

See past outcomes and comments of the CAMA RBA Shadow Board.

Read about the experts serving on the CAMA RBA Shadow Board.

Read about the mission and history of the CAMA RBA Shadow Board.