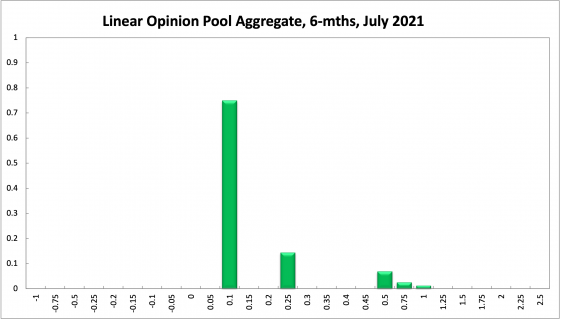 July Cash Rate Should Stay At Historic Low - Shadow Board

Another major lockdown, this time in Sydney, is fettering the economic recovery in Australia. Most economic indicators are positive, leading to favourable outcomes in the labour market in particular, but the low CPI inflation rate of 1.1% (year-on-year, Q1 of 2021), well below the RBA’s official target band of 2-3%, suggests there is still considerable slack. The RBA Shadow Board remains highly convinced that the cash rate should remain at the historically low rate of 0.1% in July. This conviction of keeping the interest rate at its record low extends to a horizon of one year.

There was another surprising tightening of the Australian labour market. The official ABS unemployment rate dropped from 5.5% in April to 5.1% in May, on the heel of very strong jobs growth (an increase of 115,000 in total employment). Not only did the unemployment rate drop but the labour force participation rate increased, from 65.9% to 66.2%. Youth unemployment remained largely unchanged. Encouragingly, job vacancies increased to 362,000 in the second quarter of 2021, the highest ever by a large margin, and job advertisements rose 7.9% month-over-month to the highest since 2008. An important question is how much this tightening of the labour market, buttressed by a large drop in immigration, will exert pressure on wages. An important number to watch is next month’s release of the quarterly wage price index.

The Aussie dollar has lost ground in June, breaching support around the 77 US¢ mark and now trading around 75 US¢. Yields on Australian 10-year government bonds have likewise dropped, to just above 1.4%, suggesting that market participants’ future inflation expectations are falling and therefore also the pressure on the RBA to increase interest rates in the near future. The broad shapes of the yield curves are unchanged: the yield curve in short-term maturities (2-year versus 1-year) remains flat by policy design; in mid-term versus short-term maturities (5-year versus 2-year) and in higher-term maturities (10-year versus 2-year) the yield curves continue to display normal convexity. The spread between the 10-year rate and the 2-year rate shrank from 157 basis points to 138 basis points. Contrarily, the Australian stock market continued its record-breaking expansion: in the middle of June the S&P/ASX 200 stock index closed above 7,400 for the first time ever.

The global outlook depends heavily on how the Covid-19 pandemic plays out. Vaccination campaigns are seemingly bearing fruit in some countries and regions, e.g. the US, but are lagging behind elsewhere, particularly in the developing world. Australia’s vaccination campaign is the worst of all OECD countries, pushing back further the date when the government is willing to open its international borders. Assuming the Delta variant of the virus can be contained to some extent, the outlook for the global economy remains relatively strong, according to international organisations such as the OECD and IMF but obvious downside risks remain in place.

Australian consumer confidence softened for the second month in a row, as seen in the drop of the Melbourne Institute and Westpac Bank Consumer Sentiment Index from 113 to 107. NAB’s index of business confidence, after reaching a record high of 23, fell to 20 in May 2021. Other business performance indicators, on the other hand, continued to improve: the manufacturing and services PMIs, respectively, increased from 61.8 to 63.2 in June and, marginally, from 61 to 61.2 in May. Capacity utilisation levelled off, after increasing for eight successive months, to 85.1% in May. The Westpac-Melbourne Institute Leading Economic Index contracted by 0.06% month-over-month in May, following three months of improvements. Taken together, this means that the six-month annualised growth rate in the Leading Index equals 1.47% in May. For the next year the Index is expected to grow at 3.2%, well above trend. Based on these numbers, Bill Evans, chief economist of Westpac said, “it seems unlikely that the central bank would expect to have to wait until 2025 before it achieves the objectives necessary to justify the first cash rate increase since November 2010.”

The housing market continues to be on the boil, The CoreLogic home value index rose 1.9% in June, or by 13.5% compared to one year ago. All capital cities saw their home values rise. However, CoreLogic is pointing to a loss in momentum and thus a possible slowdown in the housing market’s advances; other analysts remain more bullish for the immediate future. The AI Group/HIA Australian Performance of Construction Index retreated slightly again, from 59.1 points to 58.3, but is still only 3.5 points below its record high. 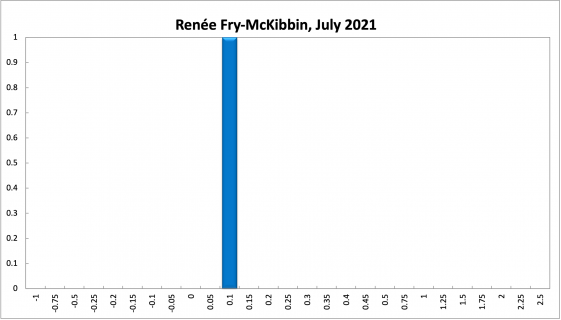 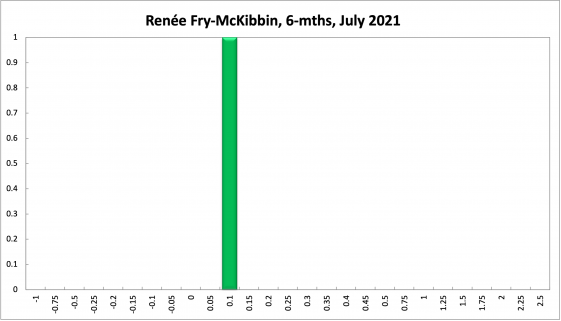 The outlook for the economy remains broadly unchanged, with all of the forward indicators still suggesting solid growth momentum in employment and output; given this, my view on the timing for cash rate rises is broadly unchanged from last month. But the current spate of lockdowns and slow pace of vaccine rollout (compared to other countries) clearly highlight that a complete return to normal will not be possible in the very near term. Previous experience here and overseas suggests that activity will rebound strongly after the lockdowns come to an end, so the recent episode is not likely to derail the economy, but given the increased transmissibility of the delta variant (and so the need for future restrictions), the downside risks have increased. 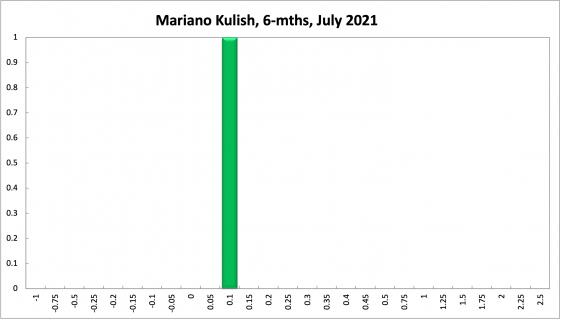 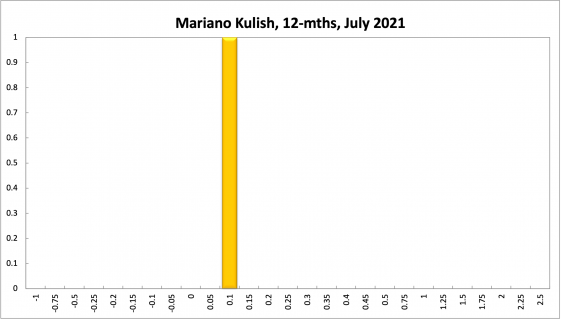 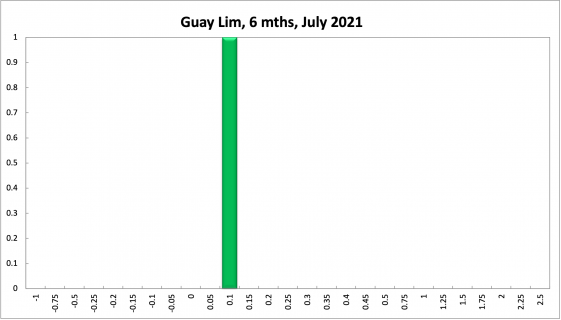 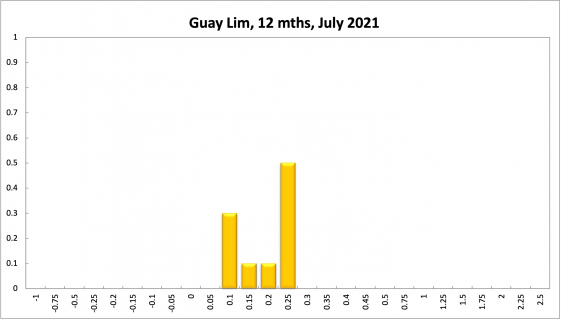 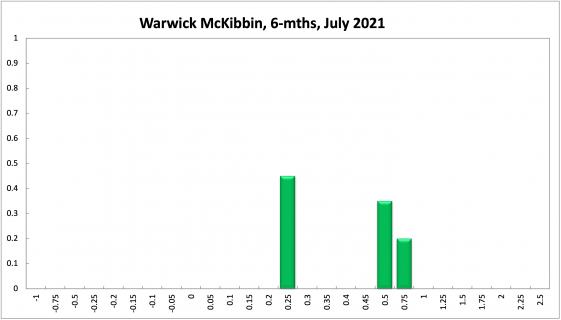 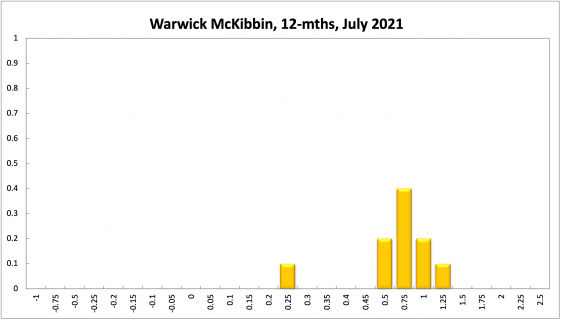 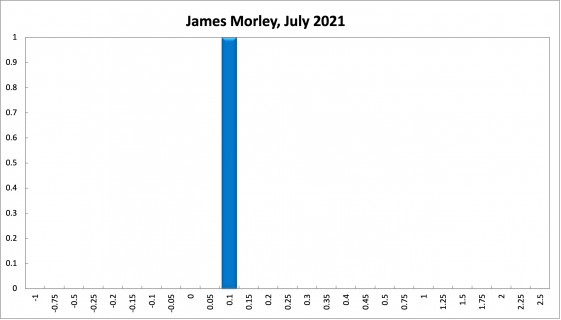 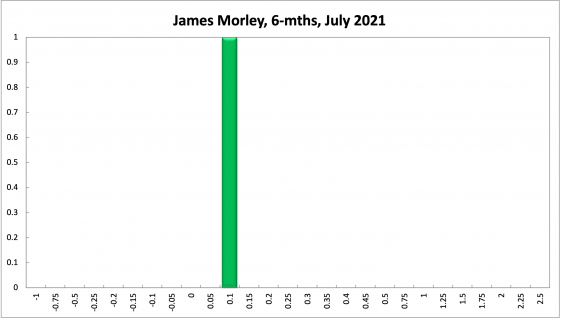 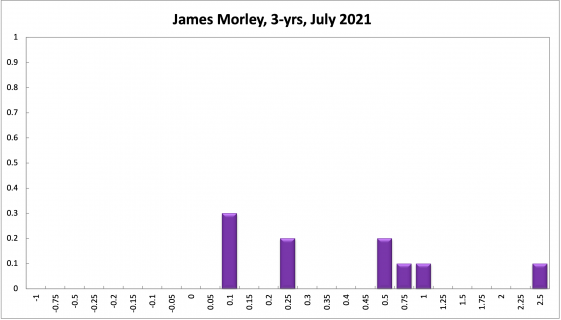 The break-even 10-year inflation rate has improved in recent months and returned to the (lower-half of the) RBA’s 2-3% target range. Also, the faster than expected fall in the unemployment rate to 5.1% in May and likely labour shortages in various sectors of the economy that will come out of hibernation in 2022 should start to boost wage pressures. Given this, I have put a bit more weight compared to last month on liftoff in April 2024 rather than November 2024. However, the RBA should make clear that liftoff in the first half of 2024 would require inflation to be sustainably in the top half of its 2-3% target range before then to help partially offset the effects of the Covid crisis (and past misses of the target range) on the price level. 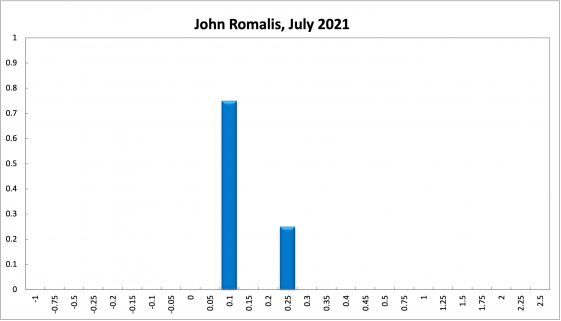 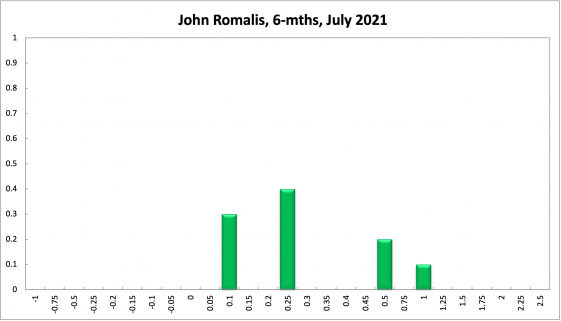 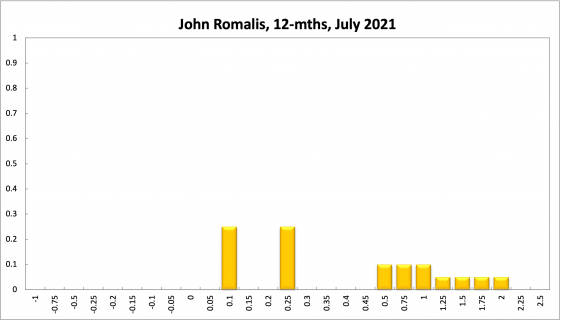 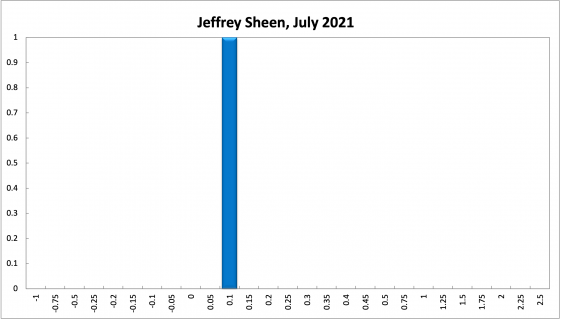 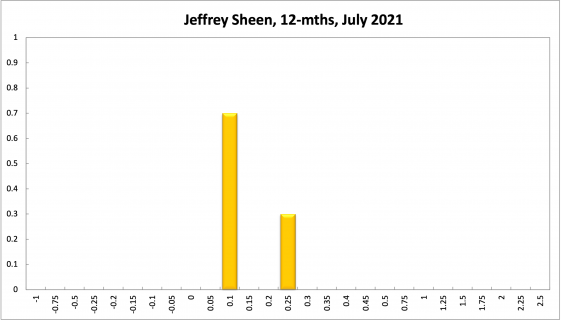 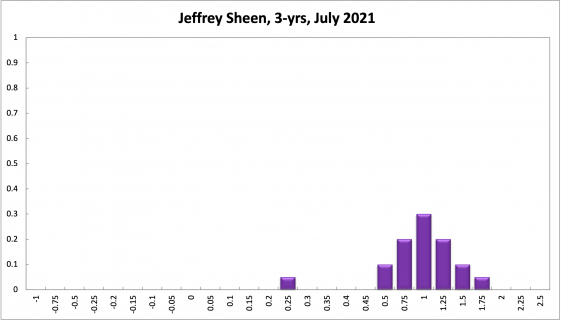