As Victoria is slowly relaxing its stage 4 restrictions and the Covid-19 infection numbers nationwide look manageable, Australia can again be cautiously optimistic. The inflation rate, based on the latest ABS CPI estimate from the June quarter (-0.3% year-on-year), remains far below the RBA’s official target band of 2-3%. The RBA Shadow Board’s conviction that the cash rate should remain at the historically low rate of 0.25% continues to be strong. It equals 78%, while the confidence in a required rate cut to below 0.25% equals 23% and the confidence in a required rate hike equals 0%.

The official ABS unemployment fell surprisingly, to 6.8% in August, in spite of the stage 4 restrictions imposed in Victoria. Other labour market measures also improved: total employment increased by 111,000, the participation rate increased from 64.7% to 64.8%, and youth unemployment, too, fell. The underemployment rate, at 11.2%, remained constant. Given the circumstances, these are promising figures. Nevertheless, the labour market is very fragile and a protracted recession, along with a wave of business failures, could see unemployment rising again.

A full appraisal of the fiscal stance will only be possible after the budget is announced on 6 October 2020. The tapered rates of JobKeeper and JobSeeker coming into effect now are removing stimulus; the government’s recent announcements to remove fringe benefits taxes to help retrain workers and its decision to abandon plans to cut R&D tax incentives are slightly expansionary. So are the income tax cuts being brought forward although the effect of them is likely to be small as they mostly benefit better-off households.

In the rest of the world, from South America, North America to Europe and the Indian subcontinent, the pandemic is in full swing and worsening. Many countries are imposing new lockdowns. These developments are going to delay any economic recovery. According to the OECD, the global outlook “looks less pessimistic, but risks and uncertainty remain high.” In its downside scenario world GDP between 2020Q3 and 2021Q3 grows between 1% and 2%, whereas in the upside scenario world GDP grows by some 7%. The baseline forecast for GDP in 2021 equals 5% for the world overall and 2.5% for Australia.

Consumer confidence rebounded considerably in September: the Melbourne Institute and Westpac Bank Consumer Sentiment Index came jumped from 79.5 for the month of August to 93.8. Month-on-month measures of retail sales, which are currently exceptionally volatile, contracted (as expected) by 4% in August, after having expanded three months in a row.

On the producer side, the message is mixed. NAB’s index of business confidence was less negative in August, compared to July, rising from -14 to -8. The manufacturing and services PMIs worsened slightly, while capacity utilization, unsurprisingly, dropped slightly, from 76.86% in July to 76.13% in August. Bankruptcies were roughly constant, though there is a real concern that these may increase substantially as government assistance is trimmed. The housing market continues to be remarkably resilient: while building permits and the construction PMI fell, house prices, the volume of home loans and new home sales are up.

The probabilities at longer horizons have spread out further: 6 months out, the confidence that the cash rate should remain at 0.25% equals 76% (92% in the September round), the probability attached to the appropriateness for an interest rate decrease, equals 23% (up from 7%), while the probability attached to a required increase is less than 1%. One year out, the Shadow Board members’ confidence that the cash rate should be held steady dropped further, 79% to 66%. The confidence in a required cash rate decrease, to 0% or 0.1%, increased to 19% and in a required cash rate increase, from 0.3% to 1%, rose to 16%. The range of the probability distributions over the 6 month and 12 month horizons now extends from 0% to 1%. 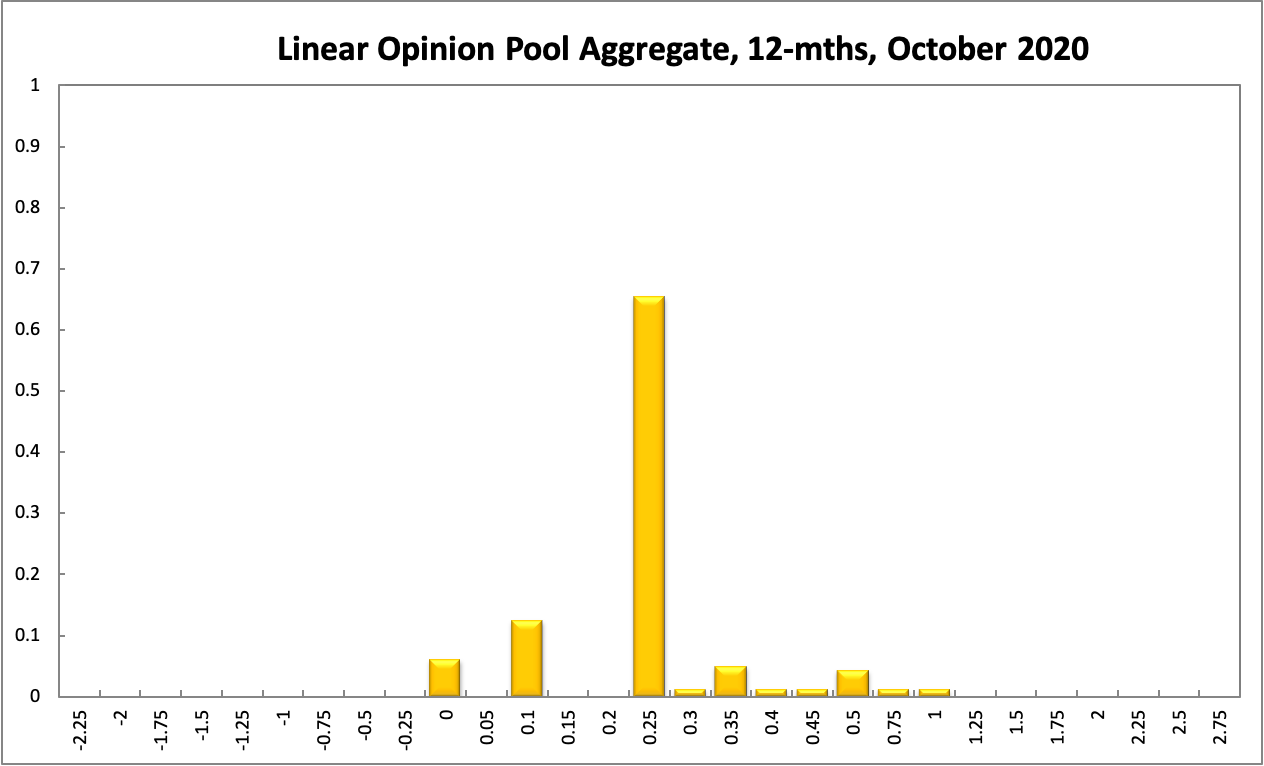