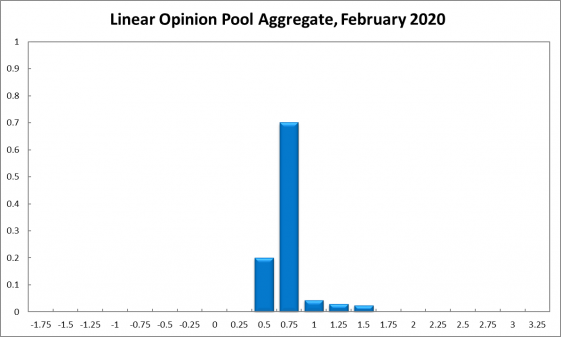 Inflation Ticks Up, Unemployment Down But, Amidst Bush Fires and Virus Outbreak, Rates Should Remain Steady

Australia’s inflation rate ticked up in the December quarter, to 1.8%, still below the Reserve Bank of Australia’s official target range of 2-3%. Along with a reduction in the unemployment rate, a booming stock market and rising house prices, these numbers might be interpreted as an overall improvement of the Australian economy. However, the global outlook remains weak and the bushfires and the coronavirus outbreak are posing new challenges. Furthermore, wages growth remains tepid and consumer and business outlook soft. The RBA Shadow Board’s conviction that the cash rate should remain at the historically low rate of 0.75% equals 70%, while the confidence in a required rate cut is 20% and the confidence in a required rate hike 10%.

Based on ABS figures for December, the seasonally adjusted unemployment rate in Australia fell to 5.1%, with the labour force participation rate remaining steady at 66%. The increase in employment, which led to the reduction in the unemployment is entirely due to a surge in part time employment (change of 29,200) as full time employment fell by 300. An update on wages growth, a key variable for gauging inflationary pressures as well as the outlook for the consumption expenditure, will not be provided until mid-February, but is widely expected to remain low.

The Aussie dollar, after a temporary rally which took it to 70 US¢, has since retreated and is back near its recent low of 67 US¢. Similarly, yields on Australian 10-year government bonds rallied towards the end of last year, only to head south again, to below 1%. The slight inversion of the yield curve in short-term maturities (2-year versus 1-year) remains in place, the spread equalling -6.6 basis points. The Australian share market joined the global rally. Most recently, the S&P/ASX 200 stock index posted an all-time high of 7,147 and remains well above 7,000.

The global economy remains weak and recent events, in particular the coronavirus outbreak, are widely expected to threaten the outlook for the global economy. This will affect Australia also. The International Monetary Fund revised its forecasts down; it now expects the global economy to grow at 3.3%, up from an estimated 2.9% for 2019 – a slight downward revision from its October World Economic Outlook. While noting positive signs in manufacturing activity and a slight improvement in China-US relations, they point to a number of downside risks, including geopolitical tensions and weather-related disasters.

This summer’s bush fires pose an additional challenge for Australia, as thousands of properties and businesses were destroyed and residents dislocated. The government’s pledge to financially support the rebuilding effort and to back away from its immediate commitment to post a sizeable budget surplus will help boost aggregate demand, depending on how effectively and efficiently this support is meted out.

Consumer confidence, as measured by the Melbourne Institute and Westpac Consumer Sentiment Index, remains below 100, coming in at 93.4 in January. According to the most recent data available (November) retail sales expanded by a mere 0.9% (month-on-month), bearing in mind this figure already includes a significant proportion of Christmas shopping. Business confidence (NAB) fell slightly in December while the manufacturing and services PMIs, after being range-bound within 50-55 for some time, have both declined to below 49. The capacity utilisation rate, after spiking to 82.04% in August, continued to fall; in November 2019 it dropped to 81.07%.

House prices, in particular in the premium sector of Sydney and Melbourne, have continued their recovery since middle of 2019. Building permits increased by 11.8% in November and new home sales bounced up a little also. However, this has yet to show up in the construction data; while no numbers on construction volume were released since the last round, the construction PMI deteriorated slightly, from 40 in November, to 38.9 in December, the lowest level since May 2013.

The probabilities at longer horizons are as follows: 6 months out, the estimated probability that the cash rate should remain at 0.75% rose fourteen percentage points, to 46%. The probability attached to the appropriateness for an interest rate decrease dropped slightly, from 36% to 34%, while the probability attached to a required increase equals 21% (33% in the previous round). One year out, the Shadow Board members’ confidence that the cash rate should be held steady equals 35% (23% in December) while the confidence in a required cash rate decrease equals 33% (36% in December) and in a required cash rate increase 32% (41% in December). The range of the probability distributions over the 6 month and 12 month horizons has widened a bit, extending from 0% to 2%. 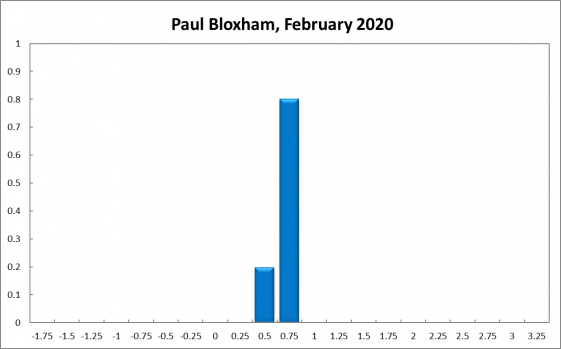 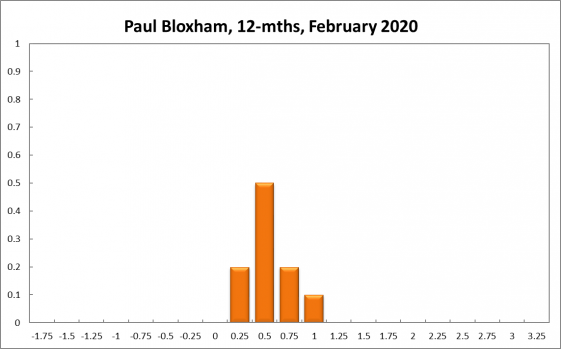 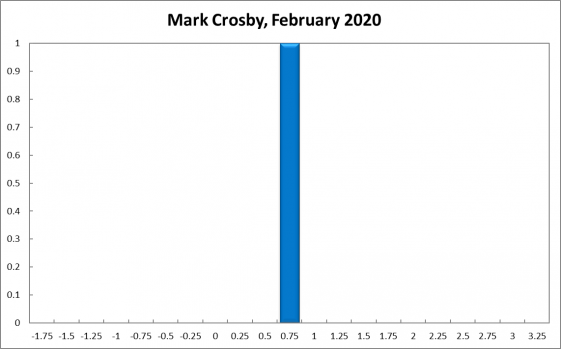 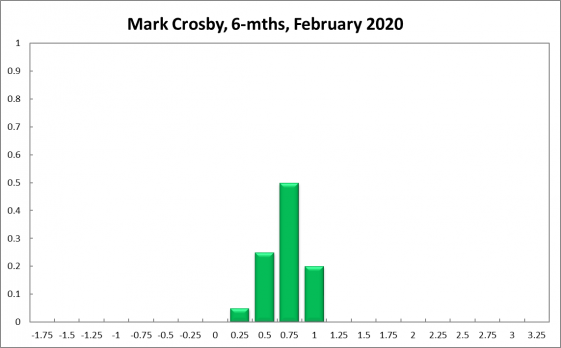 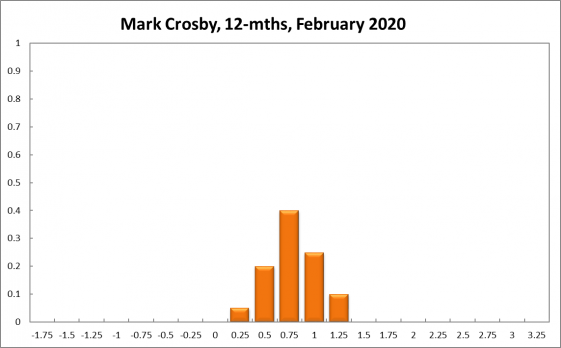 The impact of the coronavirus on China and Australia’s economy is currently highly uncertain. Normally there might be a case for cutting rates, but Feb 4 will be too soon to know the impact and warrant cutting rates. The virus has raised uncertainty also for the 6 and 12 month outlooks greatly, widening the warranted distributions at longer horizons. 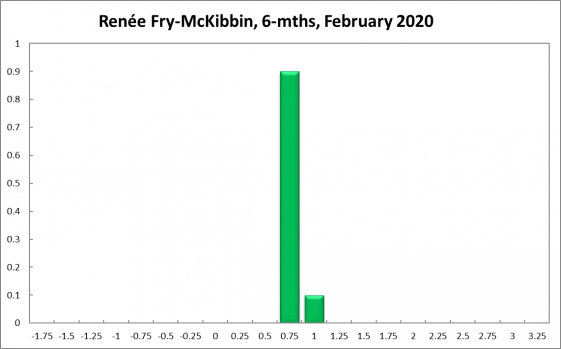 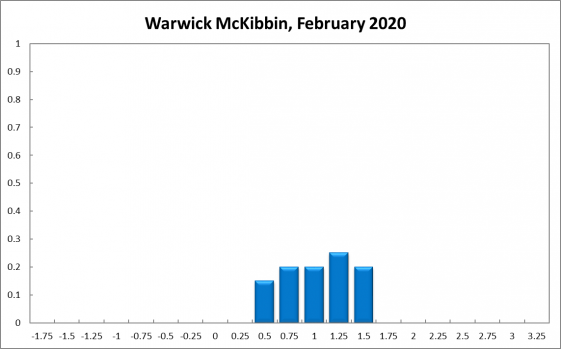 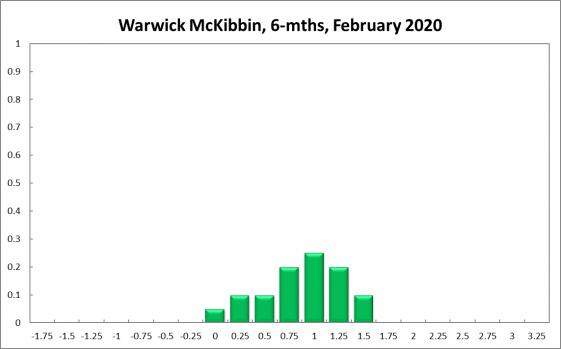 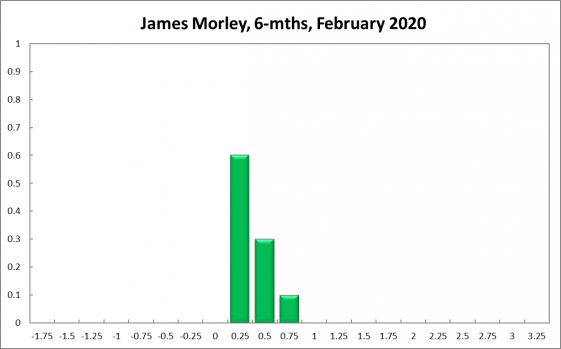 The RBA should signal that the policy rate is expected to remain close to the effective lower bound until measures of inflation expectations, such as the break-even 10-year inflation rate (which was at 1.3% annual rate in September 2019), return to the high end of the target range of 2-3%. This would likely lead to further depreciation of the exchange rate and lower current and future real interest rates. By doing so, it should help offset the unanticipated effects of the recent undershooting of the target range for inflation in terms on future levels of prices and wages in the Australian economy. The maintenance of such low rates could be expected to last more than 6-8 quarters. 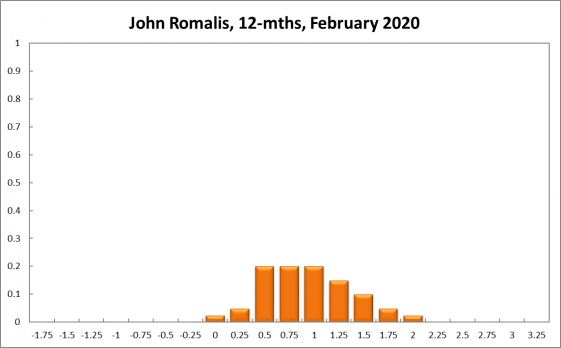 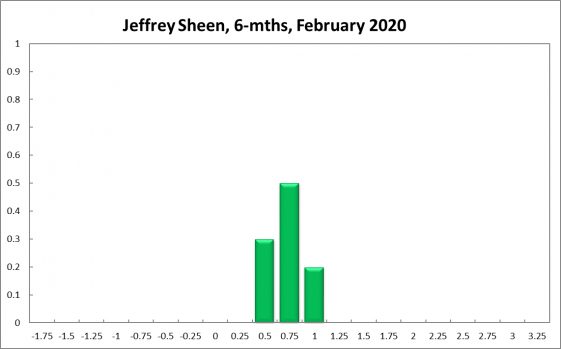 I do not recommend a change in the cash rate, though it may be tempting to lower it given low inflation, lukewarm growth and recent natural disasters. There are good reasons why trend inflation may be resisting attempts by the RBA to achieve its target range. Rather a concerted fiscal policy response is required at this stage.