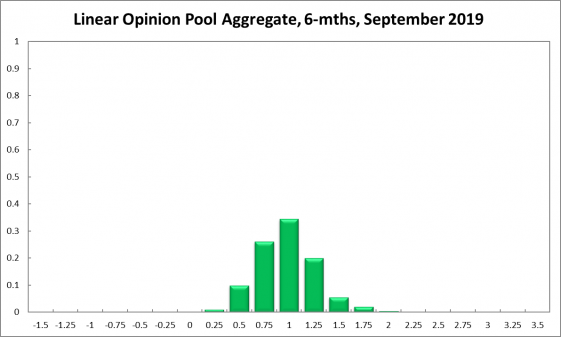 Conviction that Rates Need to Stay Steady Strengthens: Shadow Board

Australia’s inflation rate, at 1.6% (June quarter), remains well below the Reserve Bank of Australia’s official target range of 2-3%. The unemployment rate equals 5.2% for the fourth month in a row, and real wage growth remains low at 0.7%. The RBA Shadow Board’s conviction that the cash rate should remain at the new, low rate of 1% equals 71%, while the confidence in a required rate hike equals 14% and in a required rate cut equals 14%.

Based on latest ABS figures, the seasonally adjusted unemployment rate in Australia remained steady at 5.2% (July) for the fourth month in a row. The labour force participation rate ticked up to 66.1%. Encouragingly, total employment rose by more than 40,000, more than 89% of which was full-time. Nominal wage growth (year-on-year) exactly matched expectations of 2.3% for the second quarter, implying an unchanged real wage growth rate of 0.7%. As argued in previous shadow board comments, this rate of wages growth is too small to engender a significant increase in household consumption expenditure and thus remains a concern.

The Aussie dollar has continued its decline relative to the US dollar, dipping below 67 US¢. Yields on Australian 10-year government bonds, too, have extended their decline, down to a historical low of 0.89%. The dramatic fall in bond yields, along with an inversion of the yield curve in short-term maturities (2-year versus 1-year), point to a growing conviction by market participants that the economy is likely to weaken in the foreseeable future. The Australian share market, after reaching an all-time high in late July, followed the world’s lead, and retraced somewhat; the S&P/ASX 200 stock index now trades a little below 6,600.

Economic headwinds are picking up globally, with the US-Chinese trade war posing an acute danger to the short-term outlook. The Chinese economy appears to be weakening; with industrial output growth cooling to a 17-year low, an early possible sign that the trade war is having measurable effects. The uncertainty surrounding Brexit and a weakening Euro zone, especially Germany’s economy, and are likewise a threat to global economic growth. Furthermore, a number political hot spots could pose threats to global security, from the stand-off in the Strait of Hormuz to the protests in Hong Kong, which in turn may put brakes on the global economic growth.

Consumer confidence, as measured by the Melbourne Institute and Westpac Consumer Sentiment Index, increased 3.6% to 100 in the last month. This may, in part, reflect a bounce in confidence following the recent interest rate cuts. Retail sales expanded by 0.4% (month-on-month) in June, the last month for which data are available. Business confidence (NAB) and the manufacturing PMI increased in July from 49.4 to 51.3 but there was a notable drop in the services PMI from 52.2 to 43.9. Moreover, the capacity utilization rate fell to the low numbers seen earlier this year, from 82.06% in June to 80.89% in July. The slowdown in the housing sector is persisting at the same time as house prices are rebounding slightly. Building permits have fallen by 9.7% in July, as have new home sales. The construction PMI and construction output, as well as the number of home loans, have all fallen in June/July.

The probabilities at longer horizons are as follows: 6 months out, the estimated probability that the cash rate should remain at 1% equals 34%, up five percentage points. The probability attached to the appropriateness for an interest rate decrease stands at 37% (33% in August), while the probability attached to a required increase equals 28% (38% in August). The numbers for the recommendations a year out have also shifted the overall distribution down a little. The Shadow Board members’ confidence that the cash rate should be held steady equals 22% (previously 19%), while the confidence in a required cash rate decrease equals 32% (26%) and in a required cash rate increase 46% (55%). The range of the probability distributions over the 6 month and 12 month horizons has narrowed by 50 basis points, now extending from 0.25% to 2.25%. 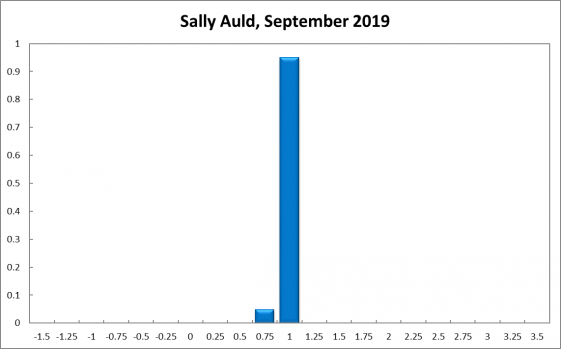 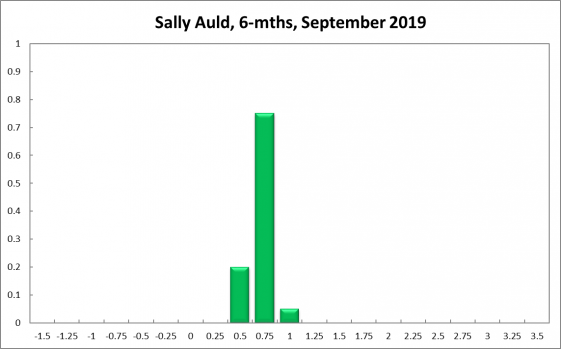 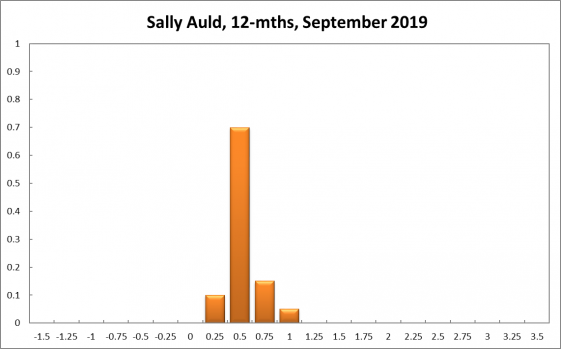 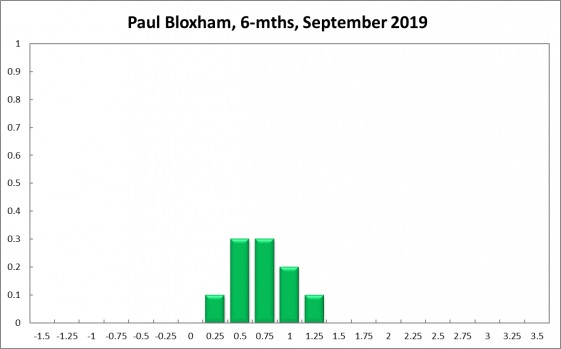 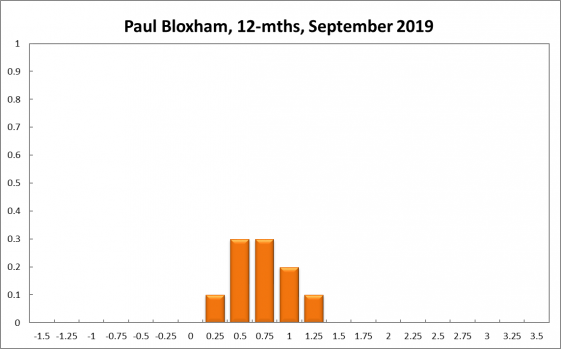 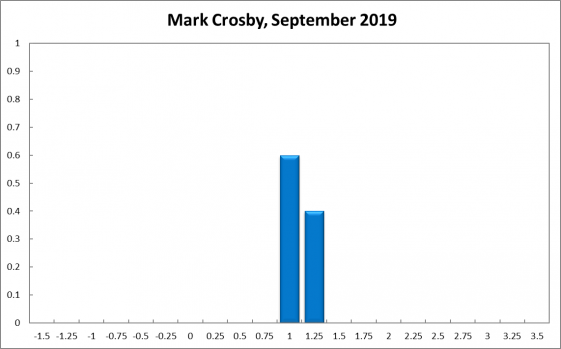 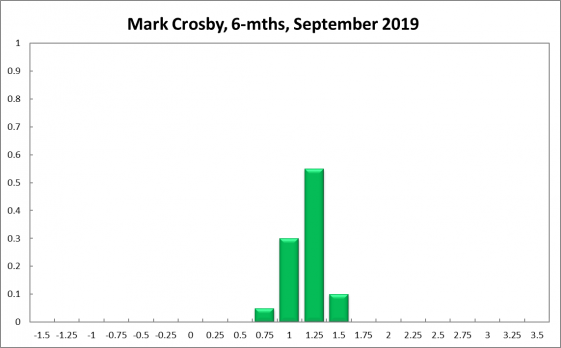 Trump’s efforts to destabilise the global economy are a major concern, and could necessitate a change in tack from the RBA if he does not back down on tariff and trade threats. Despite this the current state of the Australian economy is solid, and it is doubtful if further rate cuts will have much stimulatory impact. 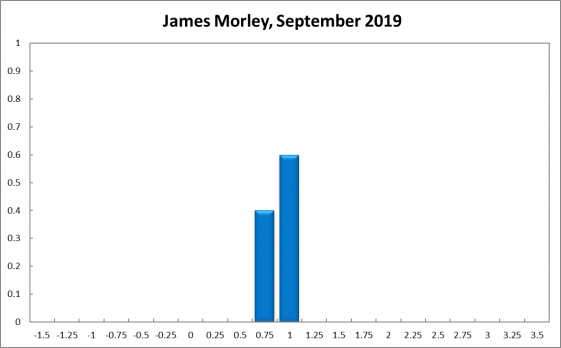 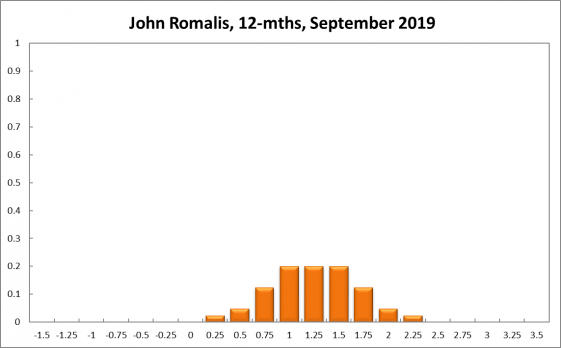 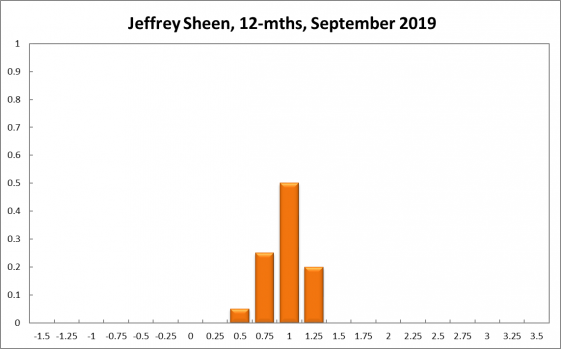