Strong Conviction that Rates Need to Stay Put: Shadow Board

Australia’s inflation rate, at 1.6% (June quarter), 0.3 percentage points higher than in the March quarter, remains well below the Reserve Bank of Australia’s official target range of 2-3%. The unemployment rate is firm at 5.2%. The RBA Shadow Board’s conviction that the cash rate should remain at the new, low rate of 1% equals 68%, while the confidence in a required rate hike equals 22% and in a required rate cut equals 11%.

Based on latest ABS figures, the seasonally adjusted unemployment rate in Australia remained steady at 5.2% (June) for the third month in a row. The labour force participation rate, too, remained constant at 66.0%. Although the overall employment change was miniscule, a fall of roughly 21,000 part-time positions was met by an equal rise in full-time positions. Neither is helping to boost private consumption expenditure which remains subdued. New data on the wage price index will not be released until mid-August but it is expected to remain unchanged at 2.3% year-on-year. With the inflation rate having edged up to 1.6%, this would constitute a fall in real wage growth to 0.7%. Feeble real wage growth, which prevents a significant increase in household consumption expenditure, remains a genuine concern for Australian policy makers.

The Aussie dollar has weakened again relative to the US dollar; it is now worth around 68 US¢. In tandem, yields on Australian 10-year government bonds have also continued their decline, down to 1.09%. These persistently low yields suggest markets share the RBA’s concern about Australia’s economic prospects. The yield curve in short-term maturities (2-year versus 1-year) remains inverted. On the other hand, the Australian share market, like the rest of the world, rallied to highs not seen since the onset of the global financial crisis, to above 6,850 for the S&P/ASX 200 stock index.

The global economy continues to pose a threat to the Australian economy. US President Donald Trump announced he will impose new 10% tariffs on US$300 billion worth of Chinese goods, thus entirely effacing his more conciliatory statements during the G20 meeting in Osaka. Geopolitical tensions, particularly between Iran and the US, are rising and threatening global stability. Chinese growth, according to recent news, also appears subdued. Global interest rates are falling, reflecting economic weakness and attempts by central banks, including the US Federal Reserve, to stimulate spending. How effective these interest rate cuts in such a low-interest environment are, is questionable. Moreover, it risks further fuelling household and government debt worldwide.

Consumer performance measures have softened in July; business performance measures are again mixed, with the manufacturing PMI recovering somewhat. Business confidence, as measured by the NAB business confidence index, retreated back to 2, well below the long-run average of 6, after it spiked up to 7 in June following the federal election. Wholesale and transport & utilities showed the weakest levels of confidence. The slowdown in the housing sector is continuing apace, with house prices in the major cities still retreating. Dwelling approvals and new home sales have fallen slightly; the construction PMI, on the other hand, improved in June.

The probabilities at longer horizons are as follows: 6 months out, the estimated probability that the cash rate should remain at 1% equals 29%. The probability attached to the appropriateness for an interest rate decrease stands at 33%, while the probability attached to a required increase equals 38%. The numbers for the recommendations a year out paint a similar picture. The Shadow Board members’ confidence that the cash rate should be held steady equals 19%, while the confidence in a required cash rate decrease equals 26% and in a required cash rate increase 55%. The distribution of the probability distributions over the 6 month and 12 month horizons has widened, extending from 0.25% to 2.75%. 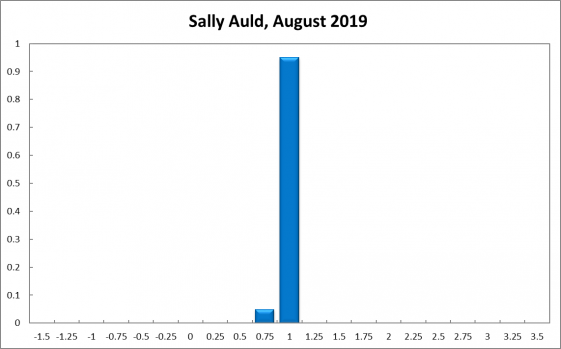 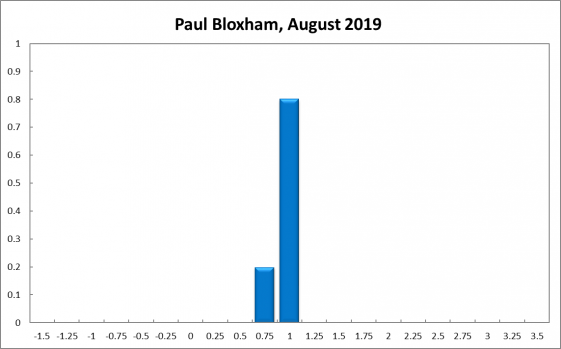 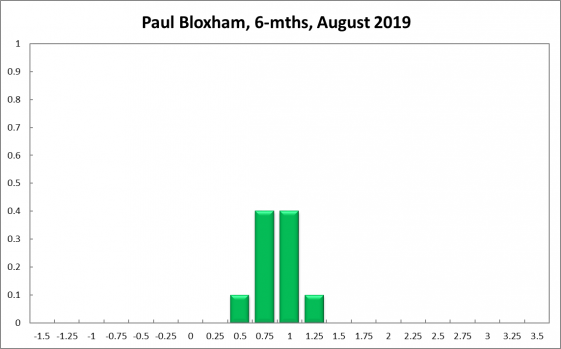 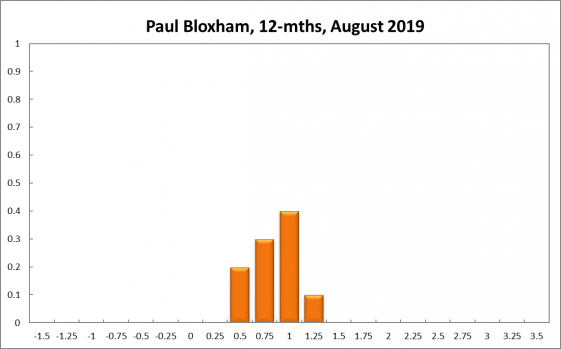 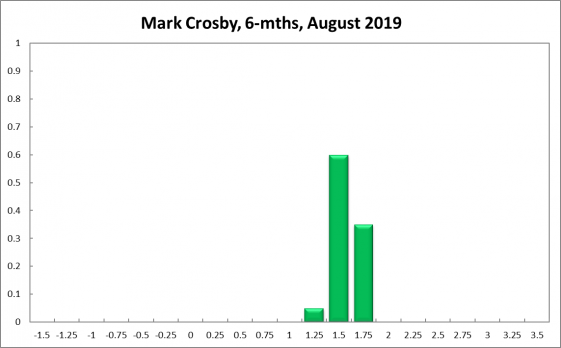 Despite the RBAs determination to push on a string, rates are well below any reasonable neutral rate and should be rising accordingly. The RBA is correct to point to the need to use other policy levers to stimulate the economy, but perhaps these levers would be more inclined to be pushed if the RBA was less willing to push rates to levels that will have little further impact on the economy. 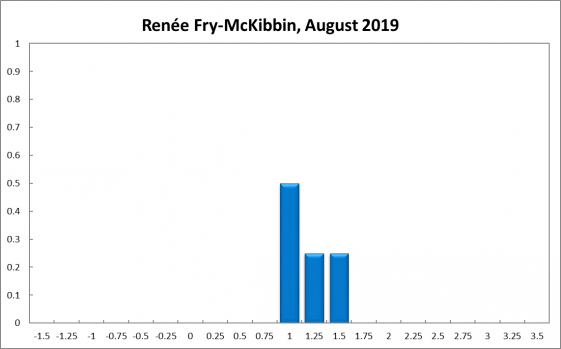 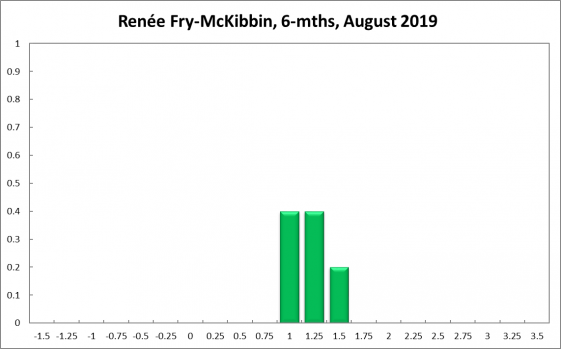 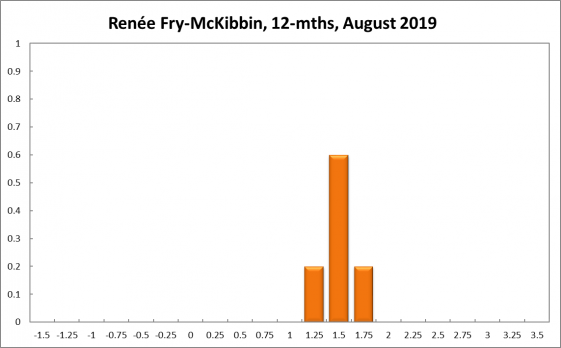 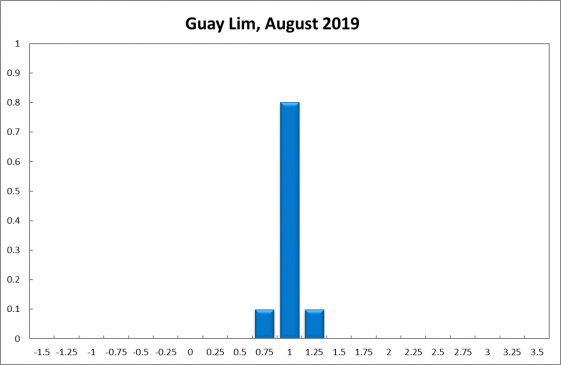 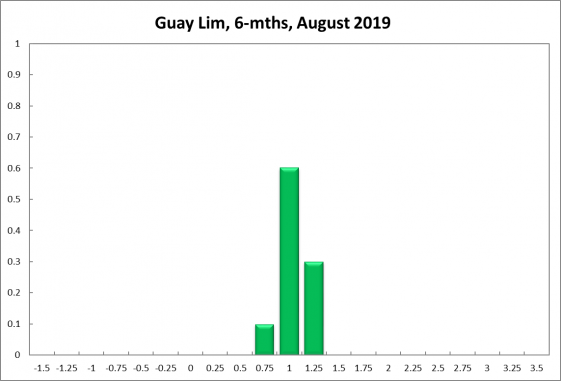 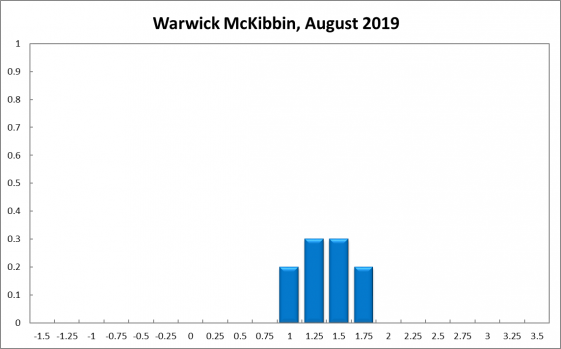 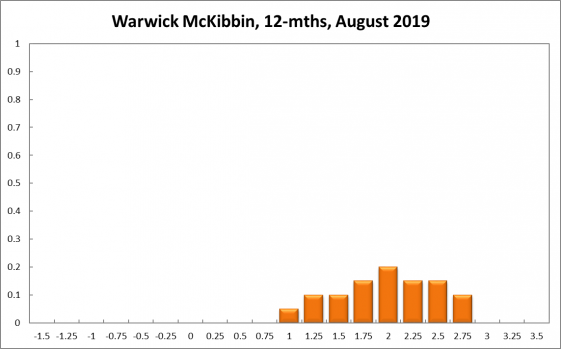 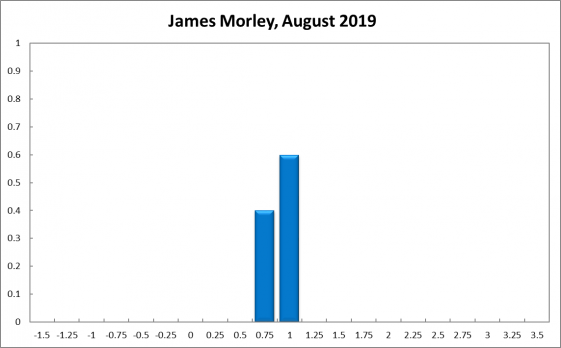 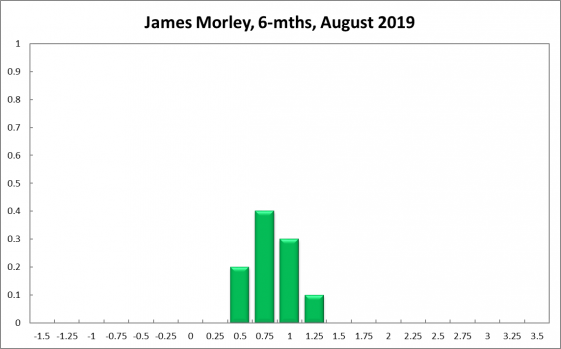 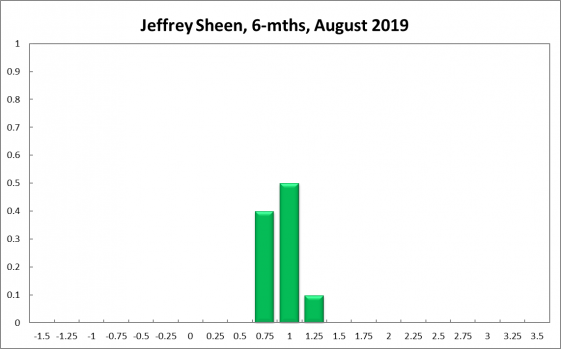 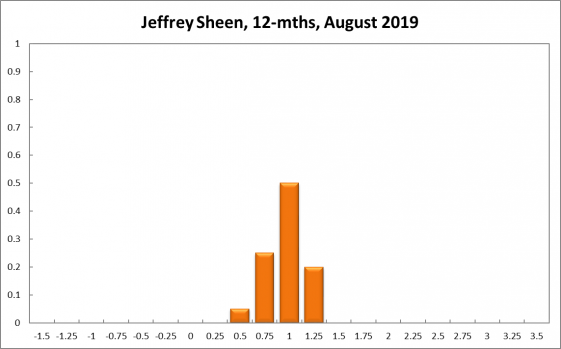 Inflation, output and wage growth remain weak, with the continuing mining investment unwind a major negative contributor. After the two recent cuts in the cash rate, it makes sense now to wait some months to see if they might stimulate business investment. Also, it is advisable to keep some conventional monetary policy space available in the event of a major crisis. Unconventional ‘slope’ policies should be readied in (the low probability) case they are needed, but it should be understood they will have less impact than conventional interventions.