Significantly, Australia’s inflation rate has fallen to 1.3% in the March quarter, putting it well below the Reserve Bank of Australia’s official target band of 2-3% and thus confirming economists’ concerns of a weakening economy. The unemployment rate ticked up to 5% in March, where consumer and business confidence measures improved slightly. The share market, following a strong overseas lead, is posting new highs. The RBA Shadow Board’s conviction that the cash rate should remain on hold next week weakened while the policy bias has clearly shifted from a rate rise to a rate cut. More specifically, the Board attaches a 54% probability that holding interest rates steady at 1.5% is the appropriate setting, while the confidence in a required rate hike equals 8% and in a required rate cut equals 38%.

Based on latest ABS figures, the seasonally adjusted unemployment rate in Australia rose back up to 5% (March), on the back of relatively strong employment growth, especially full-time employment, and a marginal rise in the labour force participation rate. There was no new data on wages growth. Its sustained weakness remains a concern.

The Aussie dollar (relative to the US dollar) has multiple times tested, and found support at, 70 US¢. From a technical perspective, the odds or breaking through this threshold and making new lows are growing. Yields on Australian 10-year government bonds bounced a little before retreating to their recent low of 1.72%. The yield curve in short-term maturities remains slightly inverted, which, statistically, may portend economic weakness and a cut in interest rates. The Australian share market joined the global stock market rally, posting new highs; the S&P/ASX 200 stock index rose to within a whisker of the 6,400 mark.

Signals about the state of the world economy are mixed. Federal Reserve chairman Jerome Powell this week sounded more confident about the US economy than what economists and financial markets indicated in the previous two months. Following Powell’s public statement, the US yield curve, usually a good predictor of economic fortunes, is slightly upward-sloping, after having briefly inverted in March. A more bullish economic outlook in the US, creates a bigger gap between yields in the US and Australia and may well fuel a further depreciation of the Australian dollar. European economies continue to flag and deflationary pressures there are mounting. The Brexit debacle is compounding the uncertainty and fall in business investment. It is too early to tell whether the slowdown in Chinese growth is likely to be temporary or persistent. Political tensions and trade disputes continue to undermine the global economy.

Consumer and business performance measures rebounded a little. The Westpac Melbourne Institute Consumer Sentiment Index rose from 98.8 to 101, whereas retail sales in February, month-on-month, increased by 0.8%. The manufacturing PMI improved from 51 to 54.8. Capacity utilisation in the economy edged up slightly, from 80.87% to 80.97%.

The real estate sector continues to weaken, with experts forecasting further declines in house prices. Coupled with a weakening macroeconomy, this will raise households’ financial stress and choke aggregate demand. Policy makers will need to look closely at the interaction between falling asset prices and weakening economic fundamentals.

The fiscal outlook will depend on the outcome of the federal election later this month and thus does not currently provide much guidance for monetary policy.

The Shadow Board’s conviction that the overnight interest rate should remain unchanged has weakened slightly. However, the perceived risks have shifted dramatically from previous months. The Board is 54% confident that keeping interest rates on hold is the appropriate policy, down seven percentage points from the previous month. It now attaches a 38% probability that a rate cut is appropriate (compared to 6% in the previous month) and only an 8% probability (33% in April) that a rate rise, to 1.75% or higher, is appropriate.

The probabilities at longer horizons are as follows: 6 months out, the estimated probability that the cash rate should remain at 1.50% has risen eleven percentage points to 38%. The probability for an interest rate decrease has increased from 28% to 38%, whence it only equalled 11% in February, while the probability attached to a required increase has fallen further, to 24%, down 20 percentage points from April. The numbers for the recommendations a year out paint a similar picture. The Shadow Board members’ confidence that the cash rate should be held steady rose eleven percentage points, to 25%, while the confidence in a required cash rate decrease equals 37% (28% in April), and in a required cash rate increase 38% (58% in April). The probability distributions over the 6 month and 12 month horizons have widened somewhat and shifted down; they are now extending from 0.25 to 3.0. 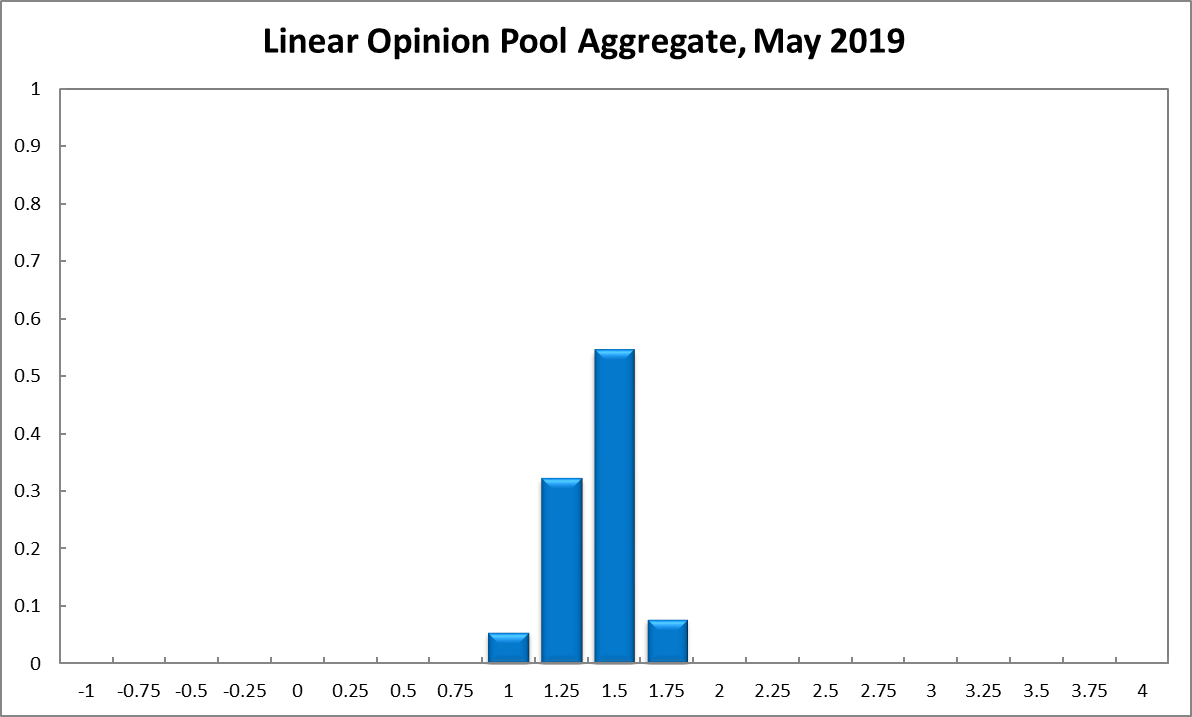 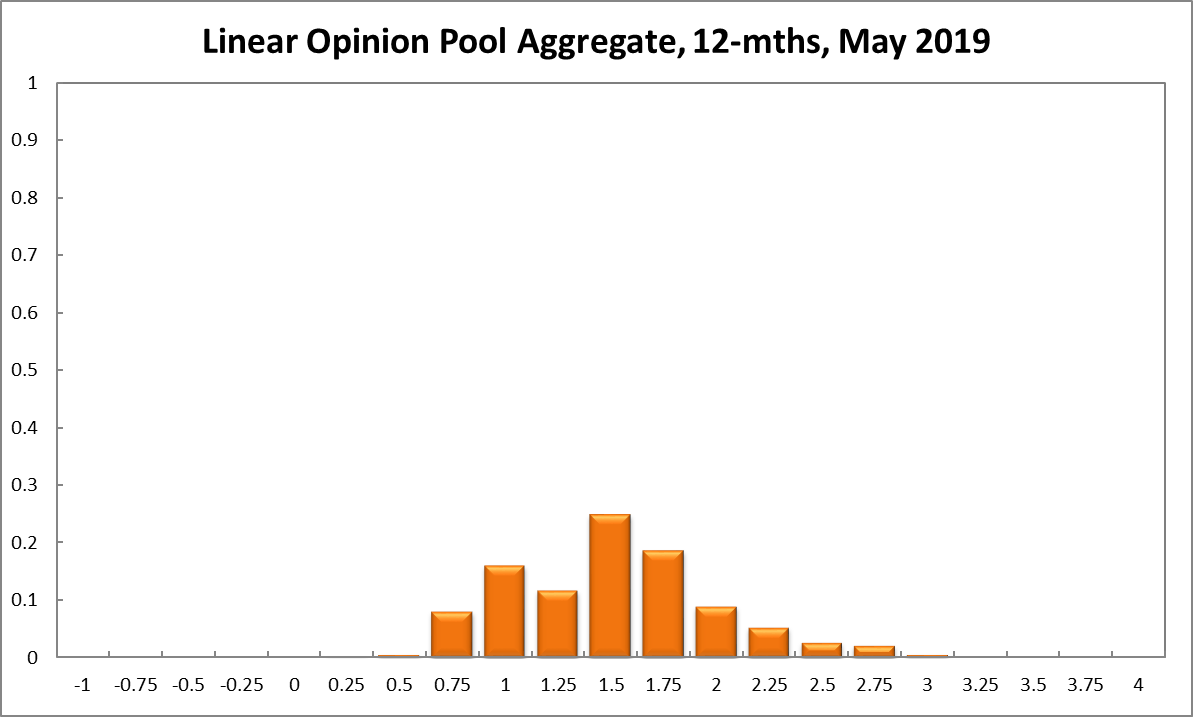 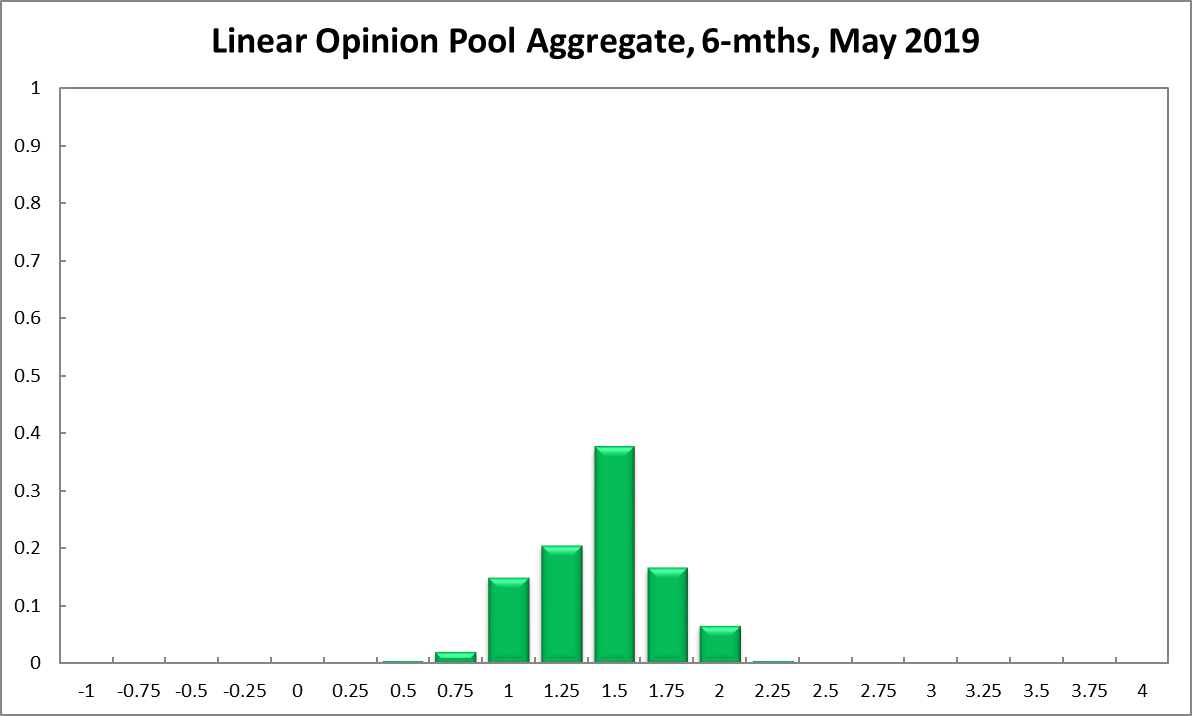