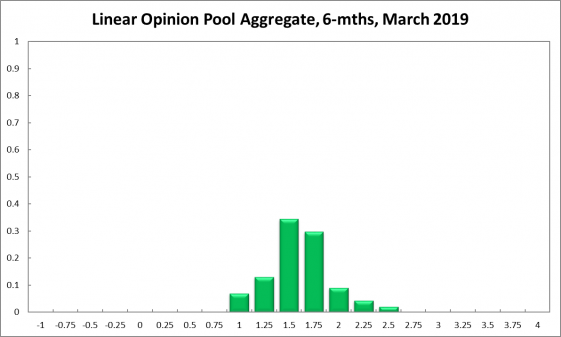 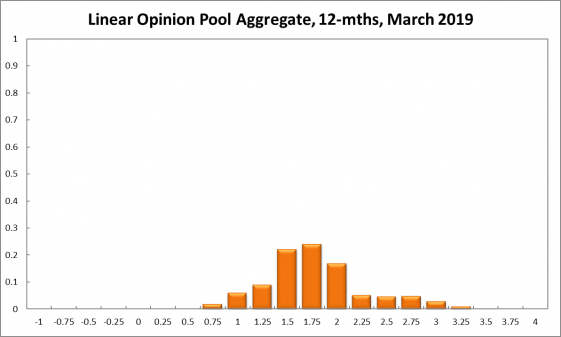 Shadow Board’s Conviction that Rates Should Remain on Hold Strengthens

Australia’s economy is not showing a clear direction. CPI inflation, most recently equal to 1.8% in the December quarter, remains below the Reserve Bank of Australia’s official target band of 2-3%. The official unemployment rate is steady at 5%. Real wages growth ticked up marginally; however, consumer and business performance and confidence measures paint a mixed picture, while the housing market is extending its slump. The RBA Shadow Board strengthened its conviction that holding the cash rate constant is appropriate while the bias towards a required increase in interest rates is lessening. More specifically, the Board attaches a 62% probability that holding interest rates steady at 1.5% is the appropriate setting, while the confidence in a required rate hike equals 35% and in a required rate cut equals 3%.

Recent data from the Australian labour market are positive. According to the ABS, the seasonally adjusted unemployment rate in Australia is unchanged at 5%. Encouragingly, in net terms, more than 65,000 full-time jobs were filled (total employment increased by 39,000), and the labour force participation rate edged up to 65.7%. The latest nominal wage growth data for the December quarter showed that it clocked in at 2.3% (annualised), unchanged from the September quarter. Thus, in real terms, wage growth in the December quarter has ticked up to 0.5%, which is still less than estimated productivity growth.

The Aussie dollar (relative to the US dollar), after testing the psychologically important floor of 70 US¢, rebounded and is now trading between 71 and 72 US¢. Yields on Australian 10-year government bonds have continued their fall, to 2.1%. The Australian share market, on the other hand, extended its recent gains, with the S&P/ASX 200 stock index approach the 6,200 mark.

Numerous international organizations, from the International Monetary Fund to the Organisation for Economic Cooperation and Development, are gently revising their 2019 outlook for the global economy down. This is in spite of financial markets continuing their new year rally and posting to new highs. The risks to the global economy remain much the same: the US’s fiscal boost from the Trump administration’s tax cuts will likely wane; Europe’s economies, including Germany’s, are weakening; emerging markets, especially the highly leveraged ones, are susceptible to the shifts in sentiment in financial markets. Furthermore, political instability and geo-strategic tensions do not seem to be abating any time soon.

Consumer and business performance measures do not show clear trends. The Westpac Melbourne Institute Consumer Sentiment Index rose from below 100 to 104 this month, whereas retail sales contracted 0.4%. The NAB business confidence index and the manufacturing PMI, improved slightly, however, the AIG Performance of Services index dropped to its lowest level in more than three years. Overall capacity utilisation in the economy also dropped, to 81.45%.

The real estate sector is continuing its retreat from recent peaks. Building permits are down 8.6% December, after having contracted by 9.8% in November. Construction output declined 3.1% in December, the January construction PMI recovered slightly (from 42.6 to 43.1 in January), and the number of new home sales, equal to 4,622, is the lowest it has been in 10 years. The consequences of this downturn in the housing market, e.g. on consumption and investment, have yet to feed through the Australian economy and will be closely considered by policy makers. The RBA has shifted its official rhetoric on interest rates, removing the upside bias and signalling that an interest rate reduction has now become a real possibility. However, as was already pointed out in earlier shadow board statements, house prices remain much higher than they were three years ago, and, taking a longer term view, a measured correction in house prices is necessary to avoid further household indebtedness.

The probabilities at longer horizons are as follows: 6 months out, the estimated probability that the cash rate should remain at 1.50% equals 34%, five percentage points up from the previous round. The probability for an interest rate decrease has increased from 11% to 20%, while the probability attached to a required increase has fallen from 60% to 46%. The numbers for the recommendations a year out paint a similar picture. The Shadow Board members’ confidence that the cash rate should be held steady grew six percentage points, to 22%, while the confidence in a required cash rate decrease equals 17% (11% in February), and in a required cash rate increase 61% (73% in February). The width of the probability distributions over the 6 month and 12 month horizons narrowed slightly, extending from 0.75 to 3.25. 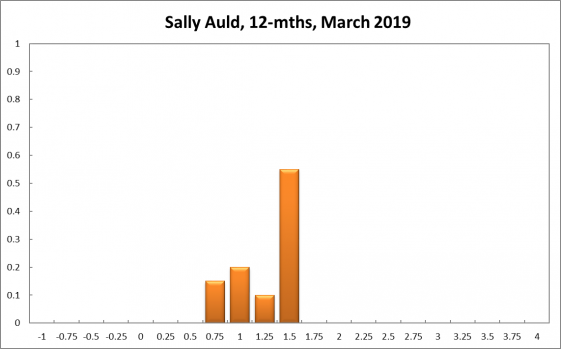 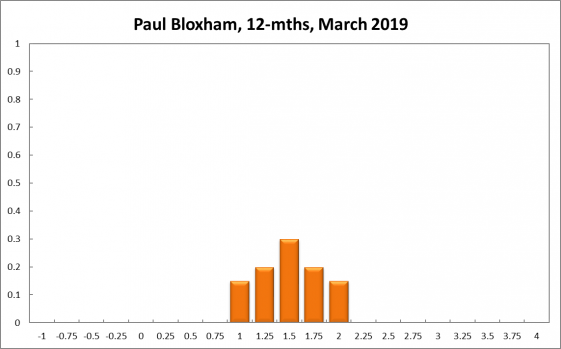 Falls in house prices are bringing this asset class back to more realistic levels. While this will have macroeconomic fallout the case for cutting rates is still not that strong. Having resisted raising rates while prices were rising it would be folly for the RBA to cut rates solely on the back of house price falls to the same level as one to two years ago. The greater concern is ongoing trade tension and other related tensions such as China’s restrictions on Australia’s coal imports. The balance of desired action has moved slightly away from raising rates in the medium term, but it should still be the case that rates move towards neutral rather than being cut at the 12 month horizon.