Australia’s growth rate still stands at 0.9 percent for the June quarter while CPI inflation remains at 2.1%, inside the Reserve Bank of Australia’s official target band of 2-3%. The official unemployment rate fell to 5%. The RBA Shadow Board rules out any likelihood that a reduction in interest rates could be called for. It attaches a 53% probability that holding interest rates steady at 1.5% is the appropriate setting, while the confidence in a required rate hike equals 47%.

According to the ABS, the seasonally adjusted unemployment rate in Australia fell 0.3 percentage points in the past month, to 5%. However, net employment increased by a mere 5,600 (compared to 44,000 in the previous month), implying that it was the significant reduction in the labour force participation rate, from 65.7% to 65.4%, responsible for generating the drop in the unemployment rate. New data on real wage growth, which has been worryingly subdued for several years now and is thus closely watched by economists, will not be released until the middle of November.

The Aussie dollar, relative to the US dollar, has traded lower, finding support just above the 70 US¢ mark. Yields on Australian 10-year government bonds have remained almost unchanged, close to 2.7%. The Australian stock market has followed the lead of the rest of the world and pared the gains made since the beginning of the year. The S&P/ASX 200 stock index is currently trading around 5,800, well below the recent high of 6,370.

There appears to be growing uncertainty about the health of the world economy, reflected in recent declines in stock markets worldwide, bond rallies, and significant jumps in volatility measures, such as the VIX. This uncertainty is both political in nature, capturing the trade tensions between the US and its trading partners, in particular China, as well as economic, with growing concerns that the unprecedented levels of private and public debt may lead to a painful deleveraging phase. The Federal Reserve in the US is expected to announce a further increase in the federal funds rate before the end of the year. While the US and a few other countries, e.g. Germany, are showing signs of strength, at least temporarily, elsewhere economies are looking weaker. Several Latin American countries are experiencing balance of payments crises and political upheaval that may intensify and destabilise the region. China, too, is grappling with a debt overhang and needs to rebalance its economy. Australia’s trade surplus widened to $3.02 billion in September, the ninth monthly surplus in a row, while the current account remains firmly in deficit.
Both consumer confidence, as measured by the Westpac Melbourne Institute Consumer Sentiment Index, and business confidence, according to the NAB business confidence index, have hardly changed. The manufacturing PMI weakened slightly, as did capacity utilisation. The services PMI barely nudged up. Building permits increased by 3.3% in September, after a large reduction of 9.4% in the previous month. But other housing market indicators, such as the construction PMI, continued to weaken, suggesting that the housing market has indeed peaked, at least in Sydney and Melbourne.

The distribution of the Shadow Board’s policy preferences has shifted in favour of holding the interest rate constant. The Shadow Board is 53% confident that keeping interest rates on hold is the appropriate policy, eight percentage points up from the previous month. It attaches zero probability that a rate cut is appropriate (unchanged) and a 47% probability (55% in October) that a rate rise, to 1.75% or higher, is appropriate.

The probabilities at longer horizons are as follows: 6 months out, the estimated probability that the cash rate should remain at 1.50% equals 30%, seven percentage points up from the previous month. The estimated need for an interest rate decrease is 6%, up from 4% in October, while the probability attached to a required increase has fallen from 73% to 64%. The numbers for the recommendations a year out paint a similar picture. The Shadow Board members’ confidence that the cash rate should be held steady equals 14% (16% in October), while the confidence in a required cash rate decrease equals 7% (6% in October), and in a required cash rate increase 79% (78% in October). The probability distributions over the 6 month and 12 month horizons are slowly widening: it now extends from 0.75 to 3.5. 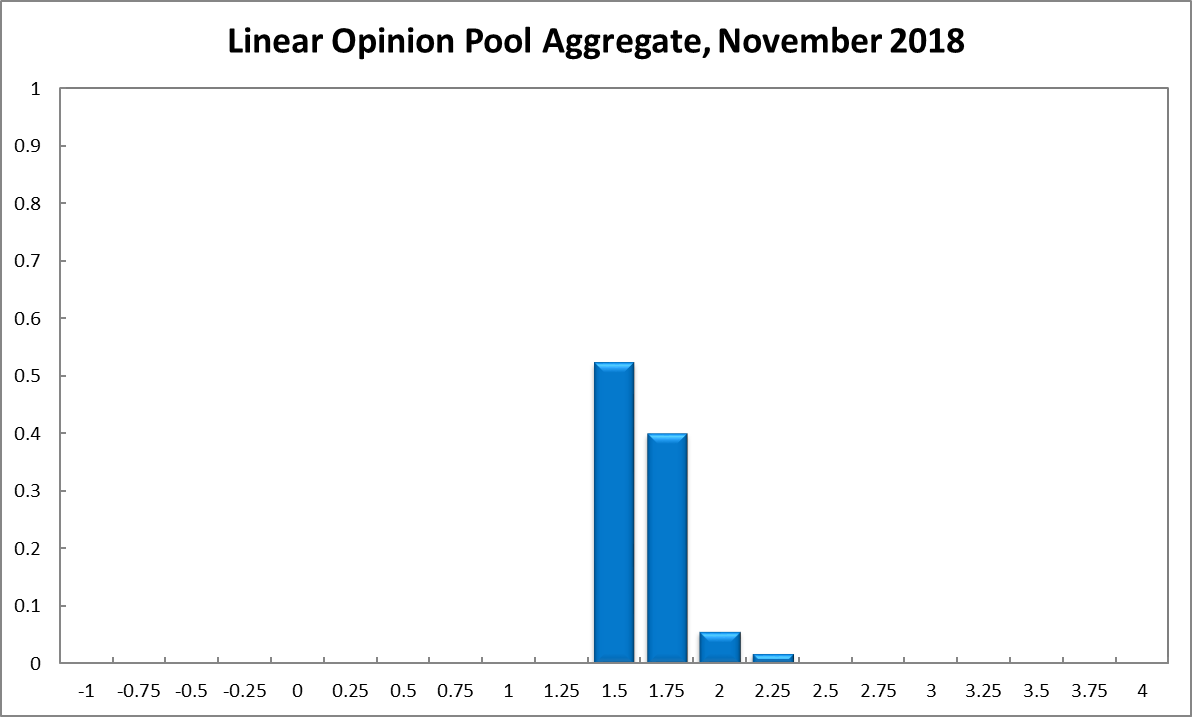 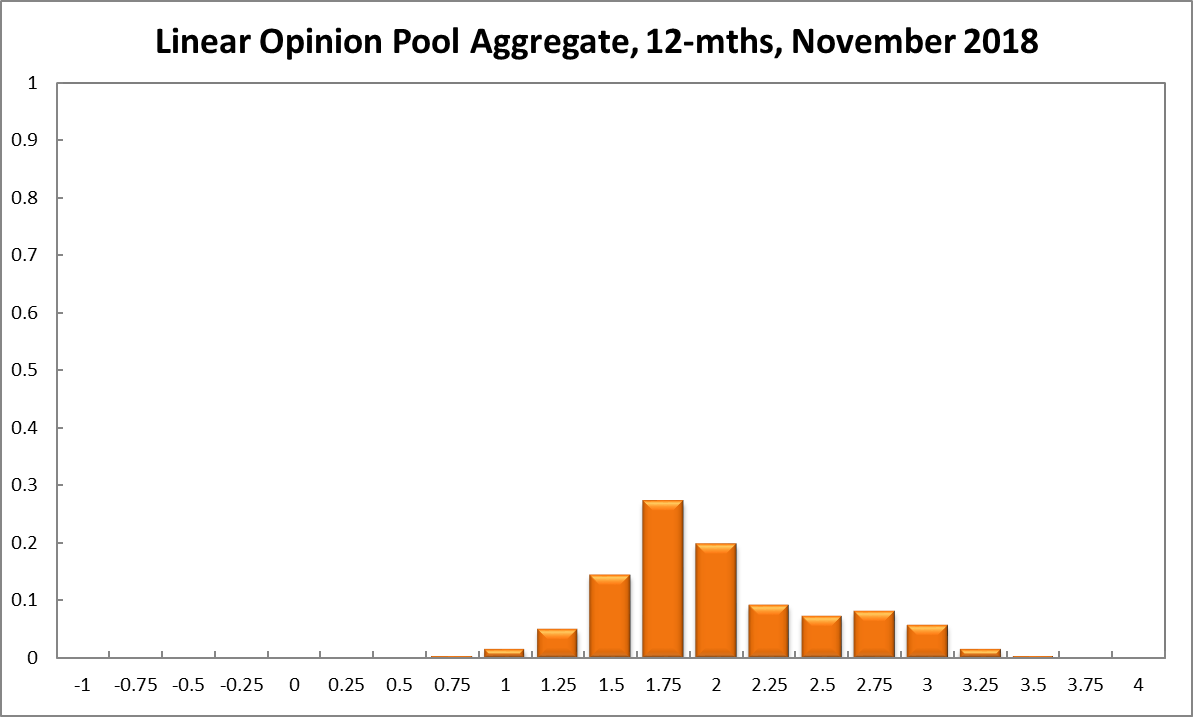 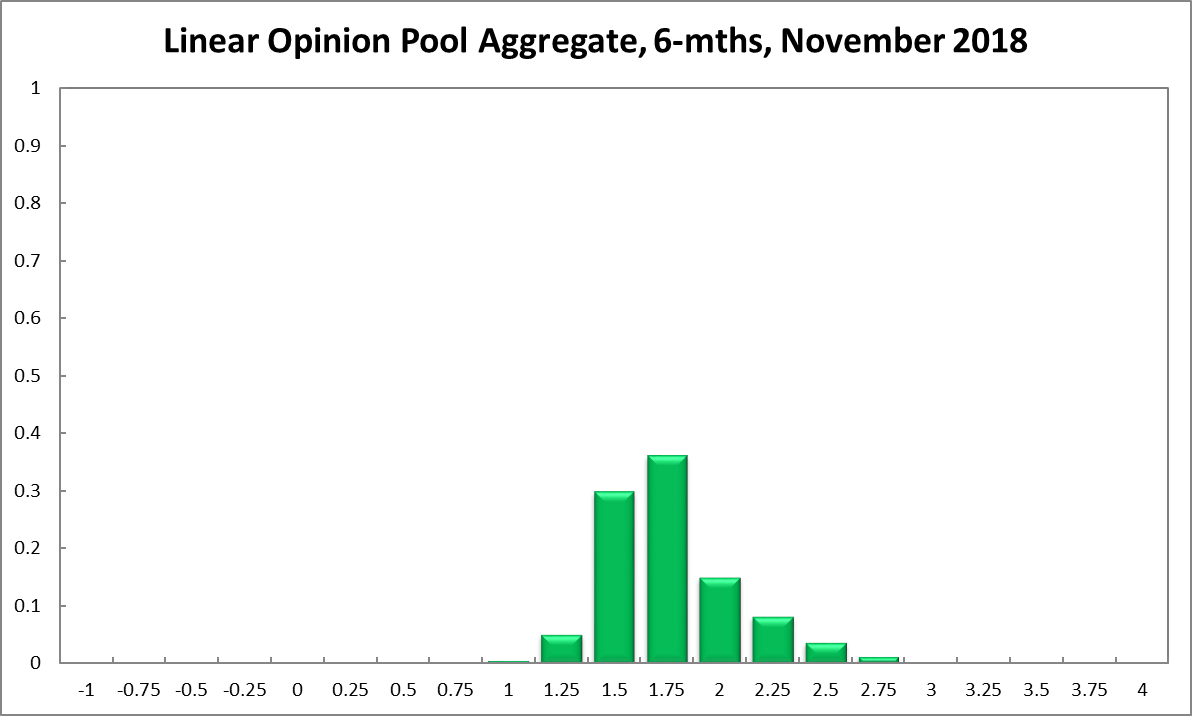