The recent leadership change in the Australian government has not altered the Shadow Board’s recommendation for interest rate policy. CPI inflation remains at 2.1%, inside the Reserve Bank of Australia’s official target band of 2-3%. The unemployment rate fell slightly to 5.3%. The RBA Shadow Board rules out any likelihood that a reduction in interest rates could be called for. Instead, it attaches a 48% probability that holding interest rates steady at 1.5% is the appropriate setting, while the confidence in a required rate hike equals 53%.

The seasonally adjusted unemployment rate in Australia, according to the latest ABS figures, fell to 5.3% (July figure). This, however, is not due to an increase in employment but due to a reduction in the labour force participation rate, which dropped from 65.7% to 65.5%. Nominal wages growth currently equals the inflation rate, 2.1%, implying that real wages are constant. For policy makers this remains a concern as sustained consumption growth relies on real wages growth.

The Aussie dollar, relative to the US dollar, has weakened somewhat, falling to 72-75 US¢ a fortnight ago before rebounding. Yields on Australian 10-year government bonds fell to 2.55%, a rate not seen for nearly a year. The Australian stock market continued its steady and modest rise; the S&P/ASX 200 stock index broke above 6,300.

High second quarter growth has continued to pull the US unemployment rate down, to 3.9%. The labour force participation rate continues to be historically low, below 63%. The tightness in the labour market is one of the reasons cited by the Federal Reserve Chairman Jerome Powell for a likely increase in the federal funds rate this, or next, month. The US administration’s economic policy shows no clear direction. On the one hand, its sabre rattling with key trading partners is intensifying; on the other hand, it is signing up to a new trade agreement with Mexico and signalled its willingness to do the same with Canada. Overall, the rise in US interest rates will put pressure on Australia to likewise increase domestic rates.

The leadership crisis in the Australian government will have raised concerns among voters and the business community about the stability of the government and policy. It is unlikely, however, that this heightened uncertainty will have an appreciable impact on consumption and investment. The new Morrison government has pledged to bring energy prices down. Though not relevant in the short run, a successful reduction in the secular rise of energy prices will likely feed through to overall prices.

Consumer confidence, as measured by the Westpac Melbourne Institute Consumer Sentiment Index, rose from 102 in the previous month to 106 in the current month. Business confidence, according to the NAB business confidence index, once again barely budged. No new manufacturing numbers were released, whereas the services PMI plummeted from 63 in June to 53 in July. Capacity utilization dropped minimally to 82% in the same month. The housing market is showing further signs of weakness – building permits in July fell by 5.2% and house prices, measured by the ABS’s housing price index, fell 0.7%. On the other hand, construction PMI rose slightly from 60.6 to 62. The evolution of the housing market will significantly affect the outlook for monetary policy. Should house prices experience a sustained decline, this will likely dampen consumption and investment in the economy and thus reduce pressures to raise the cash rate.

The probabilities at longer horizons are as follows: 6 months out, the estimated probability that the cash rate should remain at 1.50% equals 24%, three percentage points up from the previous month. The estimated need for an interest rate decrease edged up from 4% to 6%, while the probability attached to a required increase fell from 75% to 71%. The numbers for the recommendations a year out have likewise barely changed. The Shadow Board members’ confidence that the cash rate should be held steady equals 17% (16% in August), while the confidence in a required cash rate decrease equals 7% (6% in August), and in a required cash rate increase 76% (79% in August). 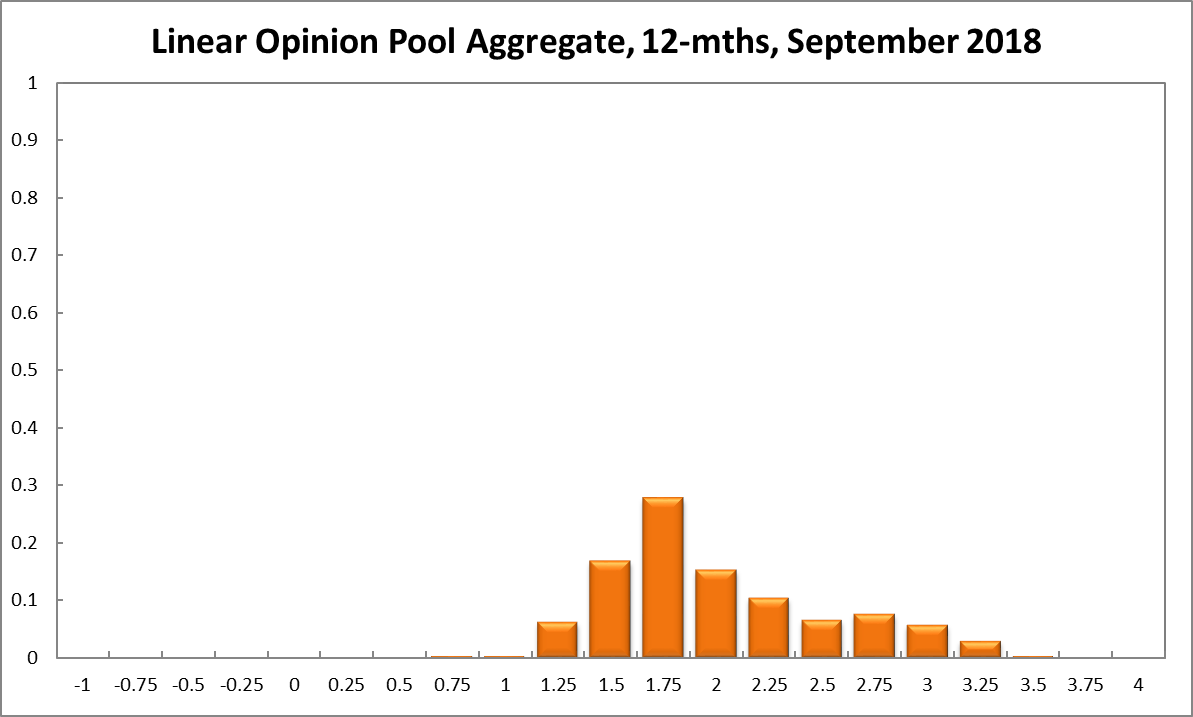